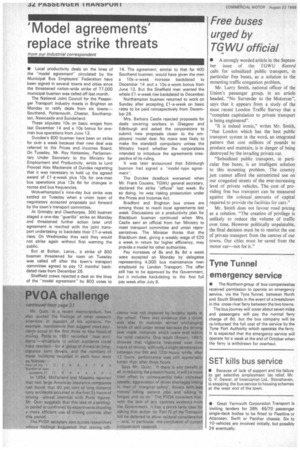 from our industrial correspondent • Local productivity deals on the lines of the "model agreement" circulated by the Municipal Bus Employers' Federation have been signed in several towns and cities since the threatened nation-wide strike of 77,000 municipal busmen was called off last month.

These stipulate 1 Os on basic wages from last December 14 and a lOs bonus for oneman bus operations from June 13.

Dundee's 800 busmen have been on strike for over a week because their new deal was referred to the Prices and Incomes Board. On Tuesday, Mr. Roy Hattersley, Parliamentary Under Secretary to the Ministry for Employment and Productivity, wrote to Lord Provost Alex Mackenzie of Dundee regretting that it was necessary to hold up the agreed award of £1-a-week plus 10s for one-man bus operations plus 13s 6d for changes in routes and bus frequencies.

Wolverhampton's nine-day bus strike was settled on Tuesday when a union team of negotiators accepted proposals put forward by the town's transport committee.

At Grimsby and Cleethorpes, 300 busmen staged a one-day "guerilla" strike on Monday and threatened further action later until agreement is reached with the joint transport undertaking to backdate their .C1 -a-week rises. On Wednesday they said they would not strike again without first warning the public.

But at Bolton, Lancs., a strike of 800 busmen threatened for noon on Tuesday was called off after the town's transport committee agreed to pay 12 months' backdated rises from December 26.

Northampton busmen returned to work on Sunday after accepting £1-a-week on basic rates to be paid retrospectively from December 26.

Mrs. Barbara Castle rejected proposals for deals covering workers in Glasgow and Edinburgh and asked the corporations to submit new proposals closer to the employers' model deal. No move was likely to make the standstill compulsory unless the Ministry heard whether the corporations intended to introduce the agreements irrespective of its ruling.

It was later announced that Edinburgh busmen had signed a "model -type agreement".

The Dundee deadlock worsened when Mr. Frank Cousins, TGWU general secretary, declared the strike "official" last week. By so doing, he was risking prosecution under the Prices and Incomes Act.

Bradford and Brighton bus crews are among those to reach local agreements last week. Discussions on a productivity plan for Blackburn busmen continued when Mrs. Castle sent an official from her Ministry to meet transport committee and union representatives. The Minister thinks that the Blackburn deal, giving a weekly wage of £20 a week in return for higher efficiency, may provide a model for other authorities.

Pay increases of 8s and 8s 6d a week were accepted on Monday by delegates representing 4,000 bus maintenance men employed by London Transport. The offer still has to be approved by the Government, but it includes backdating to the first full pay week after July 8.