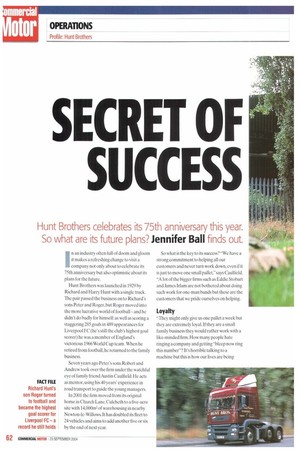 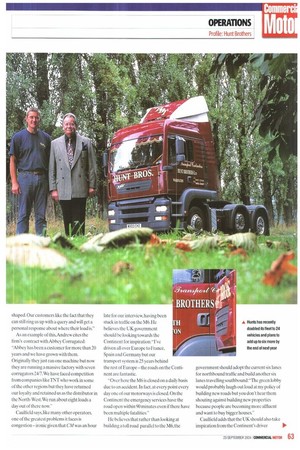 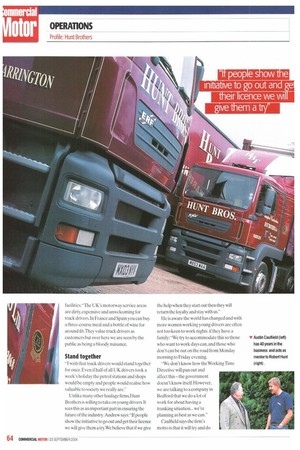 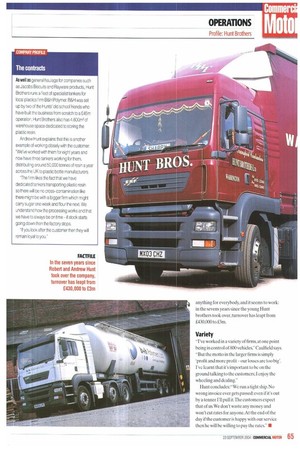 Page 62, 23rd September 2004 — SECRET OF SUCCESS
Close
Noticed an error?
If you've noticed an error in this article please click here to report it so we can fix it.
Keywords : Truck Driver

So what are its future plans? Jennifer Ball finds out.

In an industry often full of doom and gloom it makes a refreshing change to visit a company not only about to celebrate its 75th anniversary but also optimistic about its plans for the future.

Hunt Brothers was launched in 1929 by Richard and Harry Hunt with a single truck. The pair passed the business on to Richard's sons Peter and Roger, but Roger moved into the more lucrative world of football —and he didn't do badly for himself: as well as scoring a staggering 285 goals in 489 appearances for Liverpool FC (he's still the club's highest goal scorer) he was a member of England's victorious 1966 World Cup team. When he retired from football, he returned to the family business.

Seven years ago Peter's sons Robert and Andrew took over the firm under the watchful eye of family friend Austin Caulfield. He acts as mentor, using his 40 years' experience in road transport to guide the young managers.

In 2001 the firm moved from its original home in Church Lane, Culeheth to a five-acre site with 14,000m2 of warehousing in nearby Newton-le-Willows. It has doubled its fleet to 24 vehicles and aims to add another five or six by the end of next year. So what is the key to its success? "We have a strong commitment to helping all our customers and never turn work down, even if it is just to move one small pallet," says Caulfield. "A lot of the bigger firms such as Eddie Stobart and James Irlam are not bothered about doing such work for one-man bands but these are the customers that we pride ourselves on helping.

Loyalty "They might only give us one pallet a week but they are extremely loyal. If they are a small family business they would rather work with a like-minded firm. How many people hate ringing a company and getting "bleep now ring this number"? It's horrible talking to a machine but this is how our lives are being shaped. Our customers like the fact that they can still ring us up with a query and will get a personal response about where their load is."

As an example of this,Andrew cites the firm's contract with Abbey Corrugated: "Abbey has been a customer for more than 20 years and we have grown with them. Originally they just ran one machine but now they are running a massive factory with seven corruptors 24/7. We have faced competition from companies like TNT who work in some of the other regions but they have returned our loyalty and retained us as the distributor in the North-West.We run about eight loads a day out of there now."

Caulfield says, like many other operators, one of the greatest problems it faces is congestion— ironic given that CM was an hour Late for our interview, having been stuck in traffic on the Mb. He believes the UK government should be looking towards the Continent for inspiration: "I've driven all over Europe to France, Spain and Germany but our transport system is 25 years behind the rest of Europe —the roads on the Continent are fantastic.

"Over here the M6 is closed on a daily basis due loan accident. In fact, at every point every day one of our motorways is closed. On the Continent the emergency services have the road open within 90 minutes even if there have been multiple fatalities."

He believes that rather than looking at building a toll road parallel to the M6, the government should adopt the current six lanes for northbound traffic and build another six lanes travelling southbound: "The green lobby would probably laugh out loud at my policy of building new roads but you don't hear them shouting against building new properties because people are becoming more affluent and want to buy bigger houses."

Caulfield adds that the UK should also take inspiration from the Continent's driver Po. facilities: -The UK's motorway service areas are dirty, expensive and unwelcoming for truck drivers. In France and Spain you can buy a three-course meal and a bottle of wine for around £6.They value truck drivers as customers but over here we are seen by the public as being a bloody nuisance.

"I wish that truck drivers would stand together for once. Even if half of all UK drivers took a week's holiday the petrol stations and shops would be empty and people would realise how valuable to society we really are."

Unlike many other haulage firms, Hunt Brothers is willing to take on young drivers. It sees this as an important part in ensuring the future of the industry Andrew says:"If people show the initiative to go out and get their licence we will give them a try. We believe that if we give the help when they start out then they will return the loyalty and stay with us."

He is aware the world has changed and with more women working young drivers are often not too keen to work nights if they have a family: "We try to accommodate this so those who want to work days can, and those who don't can be out on the road from Monday morning to Friday evening.

"We don't know how the Working Time Directive will pan out and affect this — the government doesn't know itself. However, we are talking to a company in Bedford that we do a lot of work for about having a trunking situation... we're planning as best as we can."

Caulfield says the firm's motto is that it will try and do anything for everybody, and it seems to work: in the sevens years since the young Hunt brothers took over, turnover has leapt from £430,000 to Dm.

Variety -I've worked in a variety of firms, at one point being in control of SOO vehicles," Caulfield says. But the motto in the larger firms is simply 'profit and more profit our losses are too big'. I've learnt that it's important to be on the ground talking to the customers:1 enjoy the wheeling and dealing."

Hunt concludes:"We run a tight ship. No wrong invoice ever gets passed: even if it's out by a tenner I'll pull it.The customers expect that of us. We don't waste any money and won't cut rates for anyone. At the end of the day if the customer is happy with our service then he will be willing to pay the rates." •