Subsidies to gi SUBSIDIES for bus operations are high on 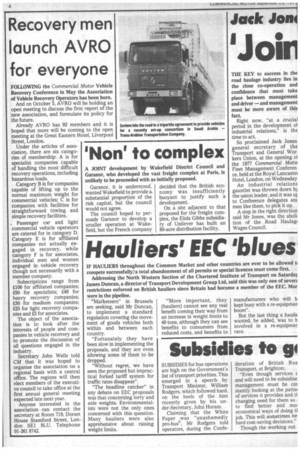 Page 10, 23rd September 1977 — Subsidies to gi SUBSIDIES for bus operations are high on
Close
Noticed an error?
If you've noticed an error in this article please click here to report it so we can fix it.
Keywords : Public Finance, Subsidies, Subsidy, Taxation, Horam, Transport, Bus

the Government's list of transport priorities. This emerged in a speech by Transport Minister, William Rodgers, which followed hard, on the heels of the hint recently given by his under-Secretary, John Horam.

Claiming that the White Paper was "unashamedly pro-bus", Mr Rodgers told operators, during the Confe deration of British Roa Transport, at Brighton: "Even though services c and will need to be subsidise management must be coi stantly looking at the pattei of services it provides and tl changing need for them so ; to find better and ma economical ways of doing tl job. This will sometimes ne hard cost-saving decisions."

Though the working out