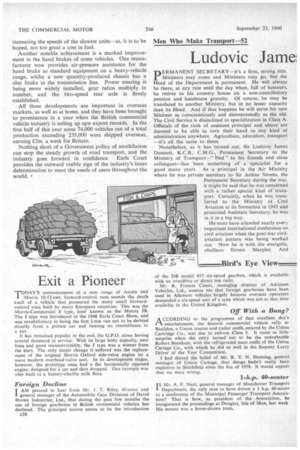 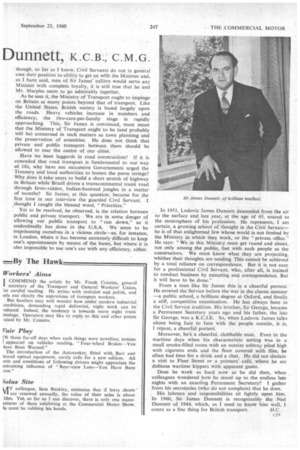 Dunnett, K.C.B., C.M.G. ERMANENT SECRETARY—it's a firm, strong title. Ministers may come and Ministers may go, but the Head of the Department is permanent. He will always be there, at any rate until the day when, full of honours, he retires to his country house on a non-contributory pension and handsome gratuity. Of course, he may be translated to another Ministry, but in no lesser capacity than its Head. And if that happens he will serve his new Minister as conscientiously and disinterestedly as the old. The Civil Service is disinclined to specialization in Class A. Officials of the rank of assistant principal and above are deemed to be able to turn their hand to any kind of administration anywhere. Agriculture, education, transport —it's all the same to them.

Nonetheless, as it has turned • out, Sir Ludovic James Dunnett, K.C.B., Permanent Secretary to the Ministry of Transport—" Ned" to his friends and close colleagues—has been something of a specialist for a good many years. As a principal in the Air Ministry where he was private secretary to Sir Arthur Streets, the Permanent Secretary during the war, it might be said that he was concerned with a rather special kind of transport. Certainly, when he was transferred to the Ministry of Civil Aviation at its formation in 1945 and promoted Assistant Secretary, he was in it in a big way.

He must have attended nearly every important international conference on

), civil aviation when the post-war civilaviation pattern was being worked out. Now he is with the energetic,• ebullient Ernest Marples. And

though, so far as I know, Civil Servants do not in general owe their position to ability to get on with the Minister and, as I have said, men of Sir James' calibre would serve any Minister with complete loyalty, it is still true that he and Mr. Marples seem to go admirably together.

As he sees it, the Ministry of Transport ought to impinge on Britain at many points beyond that of transport. Like the United States, British society is based largely upon the roads. Heavy vehicles increase in numbers and • efficiency; the two-cars-per-family stage is rapidly approaching. This, Sir James is convinced, must mean that the Ministry of Transport ought to be (and probably will be) concerned in such matters as town planning and the preservation of amenities. He does not think that private and public transport between them should be allowed to mar the centre of our cities.

Have we been laggards in road construction? If it is conceded that road transport is fundamental to our way of life, why have not successive Governments urged the Treasury and local authorities to loosen the purse strings? Why does it take years to build a short stretch of highway in Britain while Brazil drives a transcontinental trunk road through fever-ridden, Indian-haunted jungles in a matter of months? Sir James, at this question, became for the first time in our interview the guarded Civil Servant. I thought I caught the blessed word, "Priorities."

Yet to be resolved, he observed, is the relation between public and private transport. We are in some danger of allowing our public transport to "run down," as it undoubtedly has done in the U.S.A. We seem to be imprisoning ourselves in a vicious circle—as, for instance, in London, where it has become extremely difficult to keep one's appointments by means of the buses, but where it is also impossible to use one's car with any efficiency, either. In 1951, Ludovic James Dunnett descended from the air to the surface and last year, at the age of 45, soared to the stratosphere of his profession. He represents, I am certain, a growing school of thought in the Civil Service— he is of that enlightened few whose world is not limited by the Ministry in which they, work, or the "private office." He says: "We in this Ministry must get round and about, not only among the public, but with such people as the constructors. We must know what they are projecting, whither their thoughts are tending. This cannot be achieved by a total reliance on correspondence. But it is not easy for a professional Civil Servant, who, after all, is trained to conduct business by minuting and correspondence. But it will have to be done."

From a man like Sir James this is a cheerful portent. He entered the Service before the war in the classic manner —a public school, a brilliant degree at Oxford, and finally a stiff, competitiVe examination. He has always been in the Civil Service tradition. His brother, Sir George, became a Permanent Secretary years ago and his father, the late Sir George, was .a K.C.I.E. So, when Ludovic James talks about being face to face with the people outside, it is, I repeat, a cheerful portent.

Moreover, he's a cheerful, clubbable man. Even in the wartime days when his characteristic setting was in a small smoke-filled room with an outsize ashtray piled high with cigarette ends and the floor covered with files, he often had time for a drink and a chat. He did not disdain a visit to Fleet Street or a printers' café, where he ate dubious wartime kippers with apparent gusto.

Does he work as hard now as he did then, when colleagues wondered how he stood up to the endless late nights with an exacting Permanent Secretary? I gather from his secretaries (who do not complain) that he does.

His labours and responsibilities sit lightly upon him. In 1960, Sir James Dunnett is recognizably the Ned Dunnett of 1944, which, as I used to know him well, I count as a fine thing for British transport. H.C. • c29