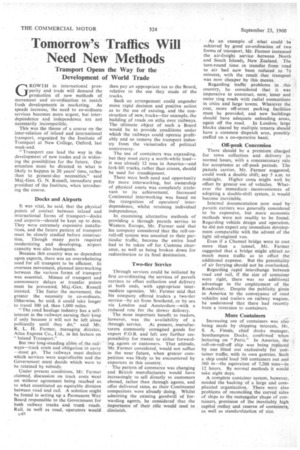 Page 266, 23rd September 1960 — Tomorrow's Traffics Will Need New Methods
Close
Noticed an error?
If you've noticed an error in this article please click here to report it so we can fix it.
Keywords :

Transport Opens the Way for the Development of World Trade

GROWTH in international prosperity and trade will demand the promotion of new methods of movement and co-ordination to match fresh developments in marketing. As speeds increase, the need to co-ordinate services becomes more urgent, but interdependence and independence are not necessarily incompatible.

This was the theme of a course on the inter-relation of inland and international transport, organized by the Institute of Transport at New College, Oxford, last week-end.

"Transport can lead the way in the development of new trades and in widening the possibilities for the future. Our attention 'must be directed to what is likely to happen in 20 years' time, rather than to present-day necessities," said Maj.-Gen. G. N. Russell, immediate past president of the Institute, when introducing the course.

Docks and Airports It was vital, he said, that the physical points. of contact between inland and international forms of transport—docks and airports—should be kept up to date. They were extremely expensive installations, and the future pattern of transport must be closely studied before construction. Though many ports required modernizing and developing, airport capacity was also inadequate.

Because this country was so dependent upon. exports, there was an overwhelming need for all transport to be efficient. In overseas movement, planned interworking between the various forms of transport was essential. Misuse of transport and unnecessary delays at transfer points must be prevented, Maj.-Gen. Russell insisted. The faster the movement, the greater the necessity to co-ordinate. Otherwise, he said, it could take longer to travel 100 yd. than 1,000 miles.

" The road haulage industry has a selfinterest in the railways earning their keep if only because it will not be left alone politically until they do," said Mr. R. L. ff. Farmer, managing director, Atlas Express Co.,, Ltd„ in his lecture on " Inland Transport."

But two long-standing alibis of the railways—track costs and obligation to carry —must go. The railways must declare which services were unprofitable and the Government must decide which were to be retained by subsidy.

Under present conditions, Mr. Farmer claimed, discussion on track costs went on without agreement being reached as to what constituted an equitable division between road and rail. A solution might be found in setting up a Permanent Way Board responsible to the Government for both railway tracks and trunk roads. Rail, as well as road, operators would

otO then pay an appropriate tax to the Board, relative to the use they made of the tracks.

Such an arrangement could engender more rapid decision and positive action as to the use of existing, and the construction of new, tracks—for example, the building of roads on stilts over railways. The ultimate object of such a Board would be to provide conditions under which the railways could operate profitably and so remove the transport industry from the vicissitudes of political controversy.

The use of containers was expanding, but they must carry a worth-while load— it was already 12 tons in America—and fork-lift trucks, rather than cranes, should be used for transhipment.

There were both need and opportunity for more interworking, but ownership of physical assets was completely irrelevant to its achievement. Increased Continental interworking was based on the recognition of operators' interdependence, whilst retaining individual independence.

In examining alternative methods of providing a through parcels service to Western Europe, Mr, Farmer said that his company considered that the roll-onroll-off system was unsuited to their particular traffic, because the entire load had to be taken off for Customs clearance, as well as being broken down for redistribution to its final destination.

Through services could be initiated by first co-ordinating the services of parcels carriers to effect collection and delivery at both ends, with appropriate intermediate agencies. Mr. Farmer said that his company offered traders a two-tier service—by air from Southend, or by sea via London and Amsterdam—with a reduced rate for the slower delivery.

The most important benefit to traders, however, was the availability of a through service. At present, manufacturers commonly consigned goods for export F.O.B. and left any further responsibility for transit to either forwarding _agents or customers. That attitude, Mr. Farmer considered, would not suffice in the near future, when greater competition was likely to be encountered by exporters in this country.

The pattern of commerce was changing and British manufacturers would have increasingly to sell directly to customers abroad, rather than through agents, and offer delivered rates, as their Continental competitors were already doing. Whilst admitting the existing goodwill of forwarding agents, he considered that the importance of their role would tend to diminish.

As an example of . what could be achieved by good co-ordination of two forms of transport, Mr. Farmer, instanced the air-freight service between North and South Islands, New Zealand. The turn-round time in transfer from road to air had now been reduced to 71 minutes, with the result that transport was now cheaper by this means.

Regarding traffic problems in this country, he considered that it was imperative to construct, now, inner and outer ring roads with radial connections in cities and large 'towns. Whatever the cost, more off-street parking facilities must be provided, and new buildings should have adequate unloading areas,

again off the road. In London, large blocks shared by multiple tenants should have a common dispatch area, possibly staffed on a co-operative basig.

There should be a premium charged for town collection and delivery in normal hours, with a concessionary rate for acceptance at off-peak periods. The parcels carrier, Mr. Farmer suggested, could work a double shift, say 5 a.m, to midnight. Higher costs might well be offset by greater use of vehicles. Whatever the immediate inconveniences of adopting a double-shift system, it would become inevitable.

Internal documentation now used byparcels carriers was generally considered to be expensive, but more economic methods were not readily to be found_ Regarding vehicle design and operation, he did not expect any immediate development comparable with the advent of the light oil-engined van.

Even if a Channel bridge were to cost more than a tunnel, Mr. Farmer suggested that a bridge might attract so much more traffic as to offset the additional expense. But the potentiality of air ferrying should not be overlooked_ Regarding rapid interchange between road and rail, if the size of container were right, there was no additional advantage in the employment of the Roadrailer. Despite the publicity given in America to the conveyance of road vehicles and trailers on railway wagons, he understood that there had recently been a reversion to containers.

More Containers Increasing use of containers was also being made by shipping interests, Mr_ S. A. Finnis, chief docks manager, Southampton Docks, confirmed when lecturing on "Ports." In America, the roll-on-roll-off ship was being replaced by one fitted out exclusively for container traffic, with its own gantries. Such a ship could load 360 containers out and 360 in—the equivalent of 7,200 tons—in 12 hours. By normal methods it would take eight days.

A complete container system, however, needed the backing of a large and complicated organization, • There were also problems of reconciling the curved sides of ships to the rectangular shape of containers, provision of the inevitably high capital outlay and reserve of containers, as well as standardization of size.