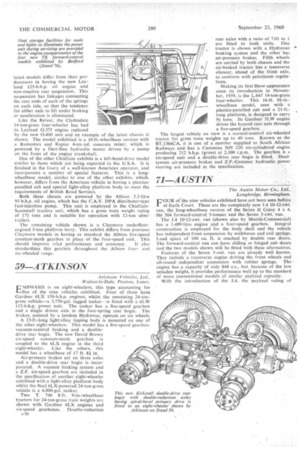 Page 148, 23rd September 1960 — 59-ATKINSON
Close
Noticed an error?
If you've noticed an error in this article please click here to report it so we can fix it.

MFHASIS is on eight-wheelers, this type accounting for ''five of the nine vehicles exhibited. Four of them have Gardner 6LX 150-b.h.p. engines, whilst the remaining 24-tongross vehicle—a 3,750-gal. lagged tanker—is fitted with a 61W 112-b.h.p. power unit. The tanker has a five-speed gearbox and a single driven axle in the four-spring rear bogie. The brakes, assisted by a tandem Hydrovac, operate on six wheels.

Air-pressure brakes act on three axles and a double-drive rear bogie is incorporated. A vacuum braking system and a Z.F. six-speed gearbox are included in the specification of another eight-wheeler exhibited with a light-alloy platform body whilst the final 6LX-powered 24-ton-gross vehicle is a 4,000-gal. tanker.

Two T. 746 8-ft. 9-in.-wheelbase tractors for 24-ton-gross train weights arc shown with Gardner. 6LX engines and six-speed gearboxes. Double-reduction rear axles with a ratio of 7.01 to l are fitted to both units. One tractor is shown with a Hydrovac braking system and the other has air-pressure brakes. Fifth wheels are carried by both chassis and the air-braked tractor has a transverse silencer, ahead of the front axle, to conform with petroleum regulations.

Making its first Show appearance since its introduction in November, 1959, is the L.645 14-ton-gross four-wheeler. This 16-ft. 01-in.wheelbase model, seen with a plastics-panelled cab and a 21-ft.long platform, is designed to carry 91 tons, Its Gardner 5LW engine drives the hypoid rear axle through a five-speed gearbox.

The largest vehicle on view is a normal-control six-wheeled tractor for gross train weights up to 40 tons. Known as the BT.1366CA, it is one of a number supplied to South African Railways and las a Cummins NH 220 six-cylindered engine producing 212 b.h.p. (gross) at 2,100 r.p.m. The gearbox is a six-speed unit and a .double-drive rear bogie is fitted. Dualsystem air-pressure brakes and Z.F.-.6emmer hydraulic power steering are included in the specification.