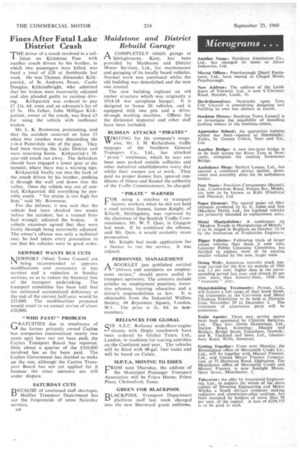 Page 122, 23rd September 1960 — Microwrams . .
Close
Noticed an error?
If you've noticed an error in this article please click here to report it so we can fix it.
Keywords :

Do-it-themselves: Newcastle upon Tyne City Council is considering designing and building its own bus shelters in future.

Stockton Meters: Stockton Town Council is to investigate the possibility of installing parking meters in the business. centre.

Apprentice School: An apprentice training school has been -opened at Stanningley, Yorks, by George Cohen, Sons and Co,, Ltd.

Another Bridget A new low-level bridge is to be built across the River Tyne at Newcastle, alongside the existing Seotswood Bridge.

Metal Manipulation: A conference on "Modern Trends in Manipulation of Metals," is to be staged in Brighton on October 12-14 by the Institution of Production Engineers.

Bigger Vehicles: Following trials of larger refuse vehicles than those it now uses, Leicester Public Cleansing Committee has decided to replace most of its existing smaller vehicles by the new, larger ones.

Doing Well: American intercity truck tonnage carried for the first six months of 1960 was 1.1 per cent,. higher than in the corresponding period last year, and almost 20 per cent, more than January-June, 1958—the " recession " year.

Metal-finishing Treatments: Pyrene, Ltd., will feature a full range of their latest finishing treatments at the Corrosion and Metal Finishing Exhibition to be held at Olympia from November 29 to December 2. The treatment of aluminium parts will be prominent.

Take-over: An offer by Associated Engineering, Ltd., to acquire the whole of the share capital of Silverton Engineering and Motor Works, a South African company making radiators and aluminium-alloy castings, has been accepted by holders of more than 99 per cent, of the capital. A suns of £254,757 is to be paid in cash.