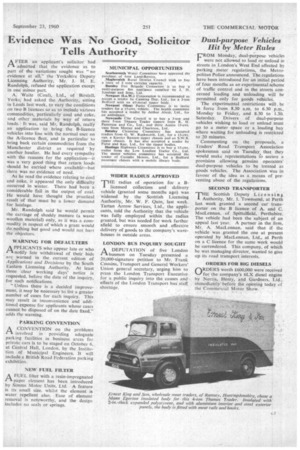 Page 119, 23rd September 1960 — Dual-purpose_ Vehicles Hit by Meter Rules
Close
Noticed an error?
If you've noticed an error in this article please click here to report it so we can fix it.
Keywords : Logistics, Transport, Business / Finance

FROM Monday, dual-purpose vehicles were not allowed to load or unload in streets in London's West End affected by parking meter regulations, the Metropolitan Police announced. The regulations have been introduced for an initial period of four months as an experimental scheme of traffic control and in the streets concerned loading and unloading will be permitted only for goods vehicles.

The experimental restrictions will be in force from 8.30 a.m. to 6.30 p.m.. Monday to Friday, and 8.30 to 1.30. Saturday. Drivers of dual-purpose vehicles wishing to load or unload must go to a meter space or a loading bay where waiting for unloading is restricted to 20 minutes.

Commenting on the proposals, a Traders' Road Transport Association spokesman said on Tuesday.. that they would make representations to secure a provision allowing genuine operators' dual-purpose vehicles to be treated as goods vehicles. The Association was in favour of the idea as a means of preventing abuse of the regulations.

THE Scottish Deputy Licensing Authority, Mr. I. Townsend, at Perth last week granted a second ear transporter on the B licence of A. and C. MacLennan, of Spittalfield, Perthshire. The vehicle had been the subject of an appeal last year. A partner in the firm, Mr. A. MacLennan, said that ifthe vehicle was granted the one at present operated by MacLennan, Ltd., at Perth on a C licence for the same work would be surrendered. This company, of which he was managing director, wanted to give up its road transport interests.

ORDERS worth £600,000 were received for the company's 6LX diesel engine by Norris, Henty, and Gardners, Ltd., iinmediately before the opening today of the Cinninercial Motor Show.