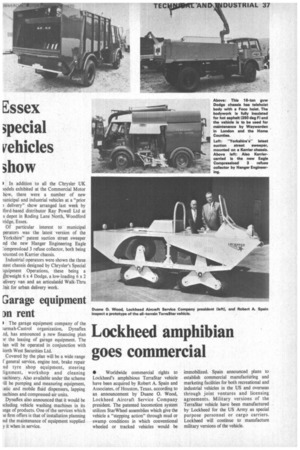 • Worldwide commercial rights to Lockheed's amphibious TerraStar vehicle have been acquired by Robert A. Spain and Associates, of Houston, Texas, according to an announcement by Duane 0. Wood, Lockheed Aircraft Service Company president. The patented locomotion system utilizes StarWheel assemblies which give the vehicle a "stepping action" through mud or swamp conditions in which conventional wheeled or tracked vehicles would be immobilized. Spain announced plans to establish commercial manufacturing and marketing facilities for both recreational and industrial vehicles in the US and overseas through joint ventures and licensing agreements. Military versions of the TerraStar vehicle have been manufactured by Lockheed for the US Army as special purpose personnel or cargo carriers. Lockheed will continue to manufacture military versions of the vehicle.