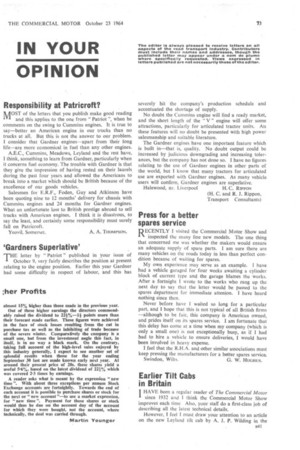 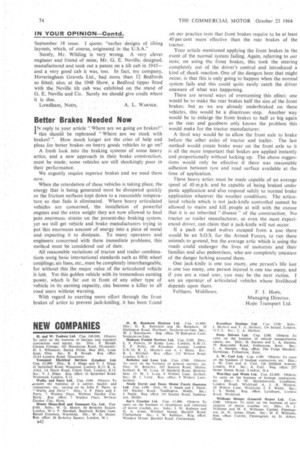 Page 75, 23rd October 1964 — IN YOUR OPINION
Close
Noticed an error?
If you've noticed an error in this article please click here to report it so we can fix it.
Keywords : Brakes, Articulated Vehicles, Vehicles, Tractor, Railway Brake, Truck, L. Gardner And Sons, Commer, Jackknifing, Semi-trailer Truck

MOST of the letters that you publish make good reading

and this applies to the one from "Patriot ", when he comments on the swing to Cummins engines. It is true to say—better an American engine in our trucks than no trucks at all. But this is not the answer to our problem. I consider that Gardner engines—apart from their long Iife—are more economical in fuel than any other engines.

A.E.C., Cummins, Meadows, Leyland and the rest have, I think, something to learn from Gardner, particularly when it concerns fuel economy. The trouble with Gardner is that they give the impression of having rested on their laurels, during the past four years and allowed the Americans to break into a market which should be British because of the excellence of our goods vehicles.

Salesmen for E.R.F., Foden, Guy and Atkinson have been quoting nine• to 12 months' delivery for chassis with Cummins engines and 24 months for Gardner engines. What an unfortunate loss to British prestige abroad to sell trucks with American engines. I think it is disastrous, to say the least, and certainly sorrie responsibility must surely fall on Patricroft.

Yeovil, Somerset. A. A. THOMPSON.

THE letter by " Patriot " published in your issue of October 9, very fairly describes the position at present relating to the engine position. Earlier this year Gardner had some difficulty in respect of labour, and this has

severely hit the company's production schedule and accentuated the shortage of supply.

No doubt the Cummins engine will find a ready market, and the short length of the " V " engine will offer some attractions, particularly for articulated tractor units. Au these features will no doubt be presented with high power salesmanship and suitable literature.

The Gardner engines have one important feature which is built in—that is, quality. No doubt output could be increased by judicious downgrading and increasing tolerances, but the company has not done so. I have no figures relating to the use of Gardner engines in other parts of the world, but I know that many tractors for articulated use are exported with Gardner engines. As many vehicle users will confirm, Gardner engines are superlative.

Press for a better spares service

RECENTLY I visited the Commercial Motor Show and inspected the many fine new models. The one thing that concerned me was whether the makers would ensure an adequate supply of spare parts. I am sure there are many vehicles on the roads today in less than perfect condition because of waiting for spares.

My own experience may serve as an example. I have had a vehicle garaged for four weeks awaiting a cylinder block of current type and the garage blames the works. After a fortnight .1 wrote to the works who rang up the next day to, say that the letter would be passed to the spares department for immediate attenion. I have heard nothing since then.

Never before have I waited so long for a particular part, and I hope that this is not typical of all British firms —although to be fair, this company is American owned, and prides itself on its spares service. I am fortunate that this delay has come at a time when my company (which is only a small one) is not exceptionally busy, as if I had had to hire a vehicle to ensure deliveries, I would have been involved in heavy expense.

I feel that the R.H.A. and other similar associations must keep pressing the manufacturers for a better spares service.

However, I feel I must draw your attention to an article on the new Leyland tilt cab by A. J. P. Wilding in the

September 18 issue, I quote: "earlier designs of tilting layouts, which, of course, originated in the U.S.A."

Surely, Mr. Wilding is very wrong. A very clever engineer and friend of mine, Mr. G. E. Neville, designed, manufactured and took out a patent on a tilt cab in 1945— and a very good cab it was, too. In fact, my company, Hoveringharn Gravels Ltd., had more than 12 Bedfords so fitted; also, at the 1948 Show, a Bedford tipper fitted with the Neville tilt cab was exhibited on the stand of G. E. Neville and Co. Surely we should give credit where it is due.

IN reply to your article "Where are we going on brakes?" A this should be rephrased "Where are we stuck with brakes? ". How much longer are the cries of help and pleas for better brakes on heavy goods vehicles to go on?

A fresh look into the braking systems of some heavy artics, and a new approach in their brake construction, must be made; some vehicles are still shockingly poor in their performance.

We urgently require superior brakes and we need them now.

When the retardation of these vehicles is taking place, the energy that is being generated must be dissipated quickly or the friction surfaces kept down to a reasonable temperature so that fade is eliminated. Where heavy articulated vehicles are concerned, the installation of powerful engines and the extra weight they are now allowed to haul puts enormous strains on the present-day braking system, yet we still get vehicle and brake manufacturers trying to put this enormous amount of energy into a piece of metal and expecting it to dissipate. To many operators and engineers concerned With these immediate problems, this method must be considered out of date.

All reasonable variations of tractor and trailer combinations using basic international standards such as fifth wheel couplings, air lines, etc., must be completely interchangeable, for Without this the major value of the articulated vehicle is lost. Yet this golden vehicle with its tremendous earning power, which is far out in front of any other type of vehicle in its earning capacity; can become a killer to all road users without warning.

With regard to exerting more effort through the front brakes of artics to prevent jack-knifing, it has been found on our practice tests that front brakes require to be at least 40 per cent more effective than the rear brakes of the tractor.

Your article mentioned applying the front brakes in the event of the normal system failing. Again, referring to our tests; on using the front brakes, this took the steering completely out of the driver's control and introduced a kind of shock reaction. One of the dangers here that might occur, is that this is only going to happen when the normal system fails and this could quite easily catch the driver unaware of what was happening.

There are several ways of overcoming this effect; one would be to make the rear brakes half the size of the front brakes; but as we are already underbraked on these vehicles, this would be a disastrous Step. Another way would be to enlarge the frontbrakes to half as big again as the rear and goodness only knows the problem this would make for the tractor manufacturer.

• A third way would be to allow the front axle to brake .before the other axles of tractor and trailer. The last method would create brake wear on the front axle so it is all the more important that brakes are applied instantly and proportionally without locking up. The above suggestions would only be effective -if there was reasonable adhesion between tyre and road surface available at the time of application.

These heavy artics must be made capable of an average speed of 40 m.p.h. and be capable of being braked under 'panic application and also respond safely to normal brake application whatever the weather conditions. The articulated vehicle which is not jack-knife controlled cannot be allowed to maim and kill people at will with the excuse that it is an inherited " disease " of the construction. No tractor or trailer manufacturer, or even the most experienced driver, can claim that a jack-knife will not occur: If a pack of mad wolves escaped from a zoo there would be an S.O.S. for the Armed Forces, to run these animals to ground, but the average artic which is using the roads could endanger the lives of motorists and their families and also pedestrians, who are completely unaware of the danger lurking around them.