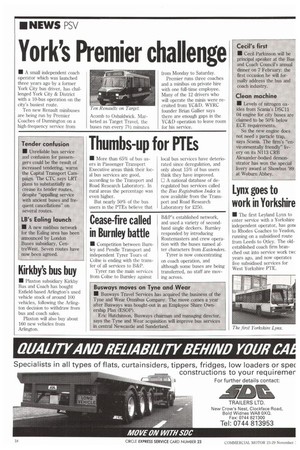 Page 20, 23rd November 1989 — Cease-fire called in Burnley battle
Close
Noticed an error?
If you've noticed an error in this article please click here to report it so we can fix it.

• Competition between Burnley and Pendle Transport and independent Tyrer Tours of Cohie is ending with the transfer of all services to B&P.

Tyrer ran the main services from Cobe to Burnley against

B&P's established network, and used a variety of secondhand single deckers. Burnley responded by introducing Routemasters and crew operation with the buses named after characters from Eastenders.

Tyrer is now concentrating on coach operation, and although some buses are being transferred, no staff are moving across.