"Give Permits Back to Hauliers 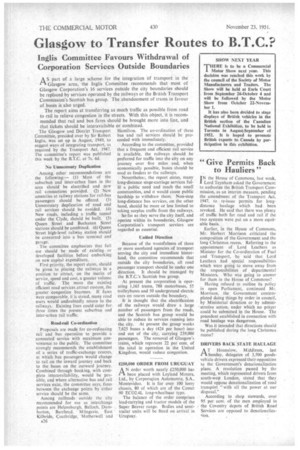 Page 28, 23rd November 1951 — "Give Permits Back to Hauliers
Close
Noticed an error?
If you've noticed an error in this article please click here to report it so we can fix it.
Keywords : Haulage, British Transport Commission, Herbert Morrison, National Freight Corporation, London Borough Of Hounslow, Hounslow, Politics

I N the House of Commons, last week, Lord Tcynham asked the Government to authorize the British Transport Commission, as an interim measure, pending the amendment of the Transport Act. 1947, to re-issue permits for longdistance haulage which had been revoked. fle said that there was plenty of traffic both for road and rail if the two systems were put on a more equitable basis.

Earlier, in the House of Commons. Mr. Herbert Morrison criticized the composition of the Government and the long Christmas recess. Referring to the appointment of Lord Leathers as Minister for the Co-ordination of Fuel and Transport, he said that Lord Leathers had special responsibilities which were going to move away from the responsibilities of departmental Ministers. Who was going to answer for them in the House of Commons?

Having refused to outline its policy in open Parliament, continued Mr. Morrison. the Government contemplated doing things by order in council, by Ministerial direction or by administrative action, under which no prayer could be submitted in the House. The precedent established in connection with road haulage was dangerous.

Was it intended that directions should be published during the long Christmas recess?

AT Hounslow, Middlesex, last Sunday, delegates of 3,500 goodsvehicle drivers expressed their opposition to the Government's denationalization plans. A resolution passed by the meeting, which represented drivers from south-west London, slated that they would oppose denationalization of road transport "with all the power at our disposal."

According to shop stewards, over 95 per cent. of the men employed in the Coventry depots of British Road Services are opposed to denationalization.