THE TRACTOR MARKET IN 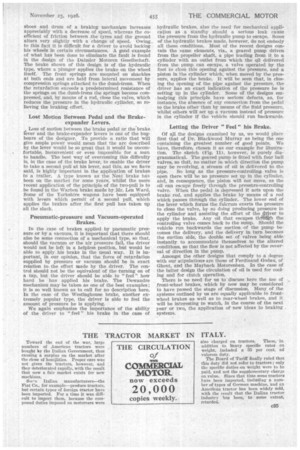 Page 57, 23rd November 1926 — THE TRACTOR MARKET IN
Close
Noticed an error?
If you've noticed an error in this article please click here to report it so we can fix it.

Toward the end of the war, large numbers of American tractors were bought by the Italian Government, thus causing a surplus on the market after the close of hostilities. Proper care was not given the tractors, however, and they deteriorated rapidly, with the result that now a fair market exists for new machines.

Sore Italian manufacturers—the Fiat Co., for example—produce tractors, but certain types of foreign tractor have been imported. For a time it was difficult to import them, because the compound duties imposed on motorcars were also charged on tractors. These, • in addition to heavy specific rates on weight, included a 3:5 per cent, ad valorem duty.

The Board of Tariff finally ruled that this duty did not refer to tractors; only the specific duties on weight were to be paid, and not the supplementary charge on value. Since that time some tractors have been imported, including a number of types of German machine, and an American tractor has been widely sold, with the result that the Italian tractor industry has been, to some extent, retarded:

Organisations: Board of Tariff, Italian Government
comments powered by Disqus