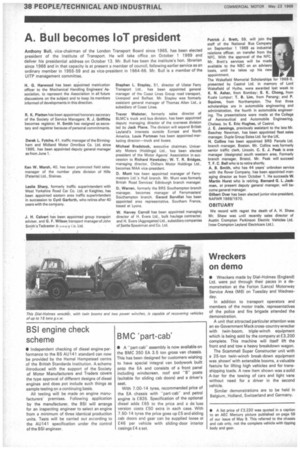 Page 40, 23rd May 1969 — BSI engine check scheme
Close
Noticed an error?
If you've noticed an error in this article please click here to report it so we can fix it.

• Independent checking of diesel engine performance to the BS AU 141 standard can now be provided by the Hemel Hempstead centre of the British Standards Institution. A scheme ihtroduced with the support of the Society of Motor Manufacturers and Traders covers the type approval of different designs of diesel engines and does pot include such things as sample testing on a continuing basis.

All testing will be made on engine manufacturers' premises. Following application by the manufacturer, the BSI will arrange for an inspecting engineer to select an engine from a minimum of three identical production units. Tests will be carried out according to the AU141 specification under the control of the BSI engineer.