Presumption is Not Evidence 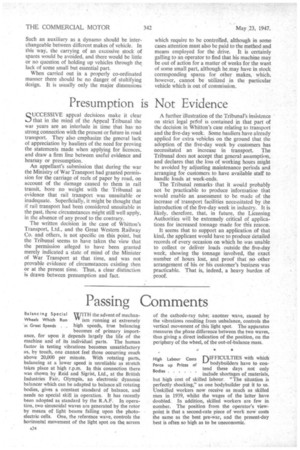 Page 26, 23rd May 1947 — Presumption is Not Evidence
Close
Noticed an error?
If you've noticed an error in this article please click here to report it so we can fix it.

QUCCESSIVE appeal decisions make it clear that in the mind of the Appeal Tribunal the war years are an interlude in time that has no strong connection with the present or future in road transport. They also emphasize the general lack of appreciation by hauliers of the need for proving the statements made when applying for licences, and draw a firm line between useful evidence and hearsay or presumption.

An appellant's submission that during the war the Ministry of War Transport had granted permission for the carriage of reels of paper by road, on account of the damage caused to them in rail transit, bore no weight with the Tribunal as evidence that rail transport was unsuitable or inadequate. Superficially, it might be thought that if rail transport had been considered unsuitable in the past, those circumstances might still well apply, in the absence of any proof to the contrary.

The written decision in the case of Whitton's Transport, Ltd., and the Great Western Railway Co. and others, is not specific on this point, but the Tribunal seems to have taken the view that the permission alleged to have been granted merely indicated a state of mind of the Minister of War Transport at that time, and was not provable evidence of circumstances existing then or at the present time. Thus, a clear distinction is drawn between presumption and fact. A further illustration of the Tribunal's insistence on strict legal proof is contained in that part of the decision in Whitton's case relating to transport and the five-day week. Some hauliers have already applied for extra vehicles on the ground that the adoption of the five-day week by customers has necessitated an increase in transport. The Tribunal does not accept that general assumption, and declares that the loss of working hours might be avoided by adjusting maintenance periods and arranging for customers to have available staff to handle loads at week-ends.

The Tribunal remarks, that it would probably not be practicable to produce information that would enable an assessment to be made of the increase of transport facilities necessitated by the introduction of the five-day week in industry. It is likely, therefore, that, in future, the Licensing Authorities will be extremely critical of applications for increased tonnage made for this reason.

It seems that to support an application of that kind, the applicant would have to produce detailed records of every occasion on which he was unable to collect or deliver loads outside the five-day week, showing the tonnage involved, the exact number of hours lost, and proof that no other arrangement of his or his customer's business was practicable. That is, indeed, a heavy burden of proof.