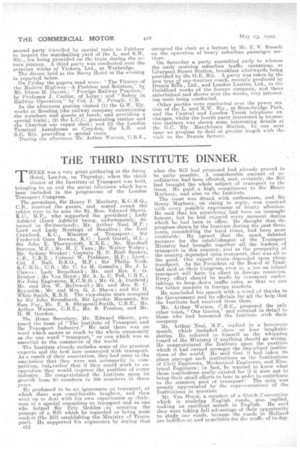 THERE was a very great, gathering at the Savoy Hotel, Lonlan, on Thursday, when the third dinner of the Institute of Transport was held,

• bringing to an end the social fultictions which have been included in the programme of the London Transport Congress.

The Home Secretary, Mr. Edward Shortt, proposed the toast of "The Institute Of Transport and the Transport Industry." He said there was no word which means so much to the whole community as the one word "transport," or one which was so essential to the commerce of the world,

The. Institute already. includes some of the greatest experts and the best nain connected with transport. As a result of their association, they had come to the conclusion' that they were not necessarily in competition, but.rather that if they could work in cooperation they would improve the position of every industry. lie congratulated the Institute upon its growth from 20 members to 300 members in three years.

He professed to be an ignoramus on transport, at which there was considerable laughter, and then went on to deal with his own experiences as chairman of a special committee on transport and as one who helped Sir Eric Geddes cin securing the passage of a Bill which he regarded as being most modest (the Bill establishing the Ministry of Transport). He supported his arguments by saying that 012

what the Bill had proposed had already proved to be quite possible. A considerable amount of coordination-had been effected, and, certainly, the Bill had brought the whole subject of transport to the front. He paid a .high., compliment to Sir Henry Maybury, and also to the Institute.

The toast was drunk with enthusiasm, and Sir Henry Maybury, on rising to reply, was received with every possible. expression of hearty affection. He said that his presidency had been an unsought, honour, but he had enjoyed every moment during which he had been in office. He thought that the progress shown by the Institute during the past three years, considefing the hard times, had been most creditable. He agreed that the much debated Measure for the establishment of the Transport Ministry had brought together all the leaders , of transport in this country, and as the prosperity of the country depended upon transport, that was all to the good. Our export trade, depended upon cheap trangport. As the President of the Board of Trade had said at their Congress, even is. a ton on inland transport will have ita effect in foreign countries. Every, effort should be made by transport undertakings to keep, down traffic rates, so that we can the better Compete in foreign markets.

He concluded his speech with a word of thanks to the Government and its officials for all the help that the Institute had received -from them.

Mr. Atthur Watson, C.B.E., proposed the only ether toast, "Our Guests," and referred in detail to those who had honoured the Institute with their company.

Mr. Arthur Neal, M.P., replied in a humorous speech, which included three or four laughable stories. He referred to himself as the whipping board of the Ministry if anything should go wrong. He congratulated the Institute upon the position which it had earned amongst the important institutions of the world. He said that it had taken its place amongst such institutions as the Institutions of Civil Engineers, Mechanical Engineers, and Electrical Engineers ; in fact, he wanted to know what those institutions really existed for if it were not to bring their _small efforts to bear in order to contribute to the common pool of transport! The quip was greatly appreciated by the representatives of the Institutions in question. Mr. Van Heyst, a member of a Dutch Convention altich is studying English roads, also replied. making an excellent Speech in English. He said they were taking full advantage of their opportunity to study. our roads, because the roads in Holland are indifferent, and unsuitable for the traffic of to-day.