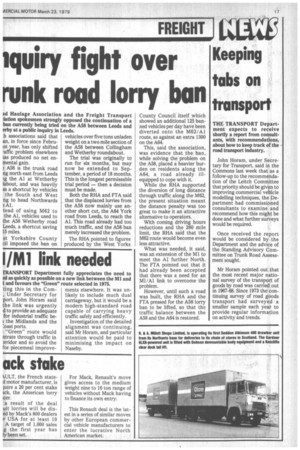 TRANSPORT Department fully appreciates the need to ed as quickly as possible on a new link between the MI and I and favours the "Green" route selected in 1975.

ting this in the CornUnder Secretary for port, John Horam said the link was urgently d to provide an adequate for industrial traffic bethe Midlands and the oast ports.

"Green" route would ntrate through traffic in )rridor and so avoid the for piecemeal improve ments elsewhere. It was unlikely to include much dual carriageway, but it would be a modern high-standard road capable of carrying heavy traffic safely and efficiently.

Investigation of the detailed alignment was continuing, said Mr Horam, and particular attention would be paid to minimising the impact on Naseby.