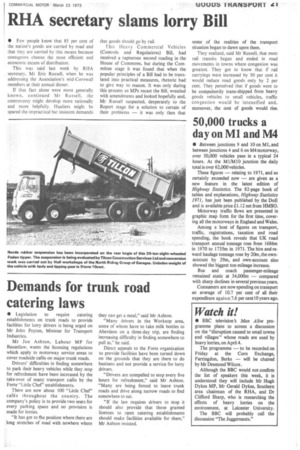 Page 23, 23rd March 1973 — Watch it!
Close
Noticed an error?
If you've noticed an error in this article please click here to report it so we can fix it.
Keywords : Converts To Judaism, Desmond Wilcox, Truck, Dykes, Bbc, Man Alive

• BBC televisions Man Alive programme plans to screen a discussion on the "disruption caused to small towns and villages" whose roads are used by heavy lorries, on April 4.

The programme -to be recorded on Friday at the Corn Exchange, Farringdon, Berks — will be chaired by Mr Desmond Wilcox.

Although the BBC would not confirm the list of speakers this week, it is understood they will include Mr Hugh Dykes MP, Mr Gerald Dykes, Southern area chairman of the RHA, and Dr Clifford Sharp, who is researching the effects of heavy lorries on the environment, at Leicester University.

The BBC will probably call the discussion "The Juggernauts."