15in. of trouble for Leyland Nationals 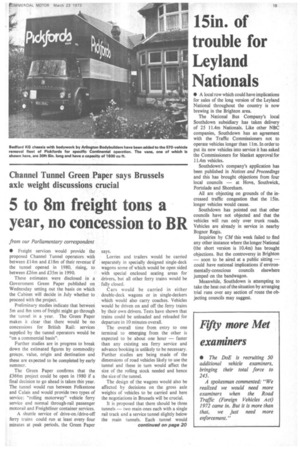 Page 21, 23rd March 1973 — 15in. of trouble for Leyland Nationals
Close
Noticed an error?
If you've noticed an error in this article please click here to report it so we can fix it.

• A local row which could have implications for sales of the long version of the Leyland National throughout the country is now brewing in the Brighton area.

The National Bus Company's local Southdown subsidiary has taken delivery of 25 11.4m Nationals. Like other NBC companies, Southdown has an agreement with the Traffic Commissioners not to operate vehicles longer than 11m. In order to put its new vehicles into service it has asked the Commissioners for blanket approval for 11.4m vehicles.

Southdown's company's application has been published in Notices and Proceedings and this has brought objections from four local councils — at Hove, Southwick, Portslade and Shoreham.

All are objecting on grounds of the increased traffic congestion that the 15in. longer vehicles would cause.

Southdown has pointed out that other councils have not objected and that the vehicles will run only over trunk roads. Vehicles are already in service in nearby Bognor Regis.

Inquiries by CM this week failed to find any other instance where the longer National (the short version is 10.4m) has brought objections. But the controversy in Brighton — soon to be aired at a public sitting — could have national implications if environmentally-conscious councils elsewhere jumped on the bandwagon.

Meanwhile, Southdown is attempting to take the heat out of the situation by arranging trial runs over any section of route the objecting councils may suggest.