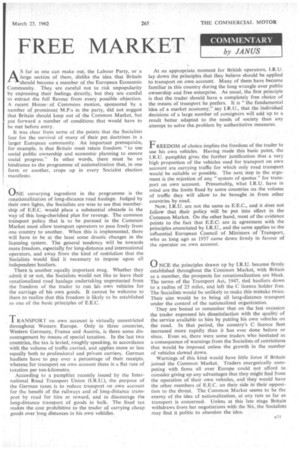 Page 65, 23rd March 1962 — FREE MARKET
Close
Noticed an error?
If you've noticed an error in this article please click here to report it so we can fix it.

AS far as one can make out, the Labour Party, or a large section of them, dislike the idea that Britain should become a member of the European Economic Community. They are careful not to risk unpopularity by expressing their feelings directly, but they are careful to extract the full flavour from every possible objection. A recent House ■ of Commons motion, sponsored by a number of prominent M.P.s in the party, did not suggest that Britain should keep out of the Common Market, but put forward a number of conditions that would have to be met before entry.

It was clear from some of the points that the Socialists fear for the survival of many of their pet doctrines in a larger European community. An important prerequisite, for example, is that Britain must retain freedom "to use social public ownership and economic planning to ensure social progress." In other words, there must be no hindrance to the programme of nationalization that, in one form or another, crops up in every Socialist election manifesto.

ONE unvarying ingredient in the programme is the renationalization of long-distance road haulage. Judged by their own lights, the Socialists are wise to see that membership of E.E.C. would place a substantial obstacle in the way of this long-cherished plan for revenge. The common trEinsport policy that is to be pursued in the Common Market must allow transport operators to pass freely from one country to another. When this is implemented, there will have to be at the least some drastic changes in the licensing system. The general tendency will be towards more freedom, especially for long-distance and international operators, and away from the kind of restriction that the Socialists would find it necessary to impose upon all independent hauliers.

There is another equally important snag. Whether they admit it or not, the Socialists would not like to leave their renationalized road haulage undertaking unprotected from the freedom of the trader to run his own vehicles for the carriage of his own goods. It cannot be welcome to them to realize that this freedom is likely to be established as one of the basic principles of E.E.C.

TRANSPOIZT on own account is virtually unrestricted throughout Western Europe. Only in three countries, Western Germany, France and Austria, is there some discouragement by means of special taxation. In the last two countries, the tax is levied, roughly speaking, in accordance with the volume of traffic carried, and applies more or less equally both to professional and private carriers. German hauliers have to pay over a percentage of their receipts, whereas for transport on own account there is a flat rate of taxation per ton-kilometre.

According to a pamphlet recently issued by the International Road Transport Union (I.R.U.), the purpose of the German taxes is to reduce transport on own account for the benefit of the railways and of long-distance transport by road for hire or reward, and to discourage the long-distance transport of goods in bulk. The fixed tax makes the cost prohibitive to the trader of carrying cheap goods over long distances in his own vehicles. M an appropriate moment for British operators, I.R.U. lay down the principles that they believe should be applied to transport on own account. Many of them have become familiar in this country during the long wrangle over public ownership and free enterprise. As usual, the first principle is that the trader should have a completely free choice of the means of transport he prefers. It is "the fundamental idea of a market economy," say I.R.U., that the individual decisions of a large number of consignors will add up to a result better adapted to the needs of society than any attempt to solve the. problem by authoritative measures.

FREEDOM of choice implies the freedom of the trader to use his own vehicles. Having made this basic point, the LR.U. pamphlet gives the further justification that a very high proportion of the vehicles used for transport on own account are carrying traffic for which only road transport would be suitable or possible. The next step in the argument is the rejection of any "system of quotas" for transport on own account. Presumably, what I.R.U. have in mind are the limits fixed by some countries on the volume of traffic they will allow to .be brought in from other countries by road.

Now, I.R.U. are not the same as E.E.C., and it does not follow that their policy will be put into effect in the Common Market. On the other hand, most of the evidence points to the fact that E.E.C. are in agreement with the principles enunciated by I.R.U., and the same applies to the influential European Council of Ministers of Transport, who as long ago as 1957 came down firmly in favour of the operator on own account.

0 NCE the principles drawn up by I.R.U. become firmly established throughout the Common Market, with Britain as a member, the prospects for renationalization are bleak. The terms of the Transport Act, 1947, tied hauliers down to a radius of 25 miles, and left the C licence holder free. The Socialists would be unlikely to make this mistake twice. Their aim would be to bring all long-distance transport under the control of the nationalized organization.

They are bound to remember that on the last occasion the trader expressed his dissatisfaction with the quality of the service available to him by putting his own vehicles on the road. In that period, the country's C licence fleet increased more rapidly than it has ever done before or since, Even so, there were some traders who hesitated as a consequence of warnings from the Socialists of restrictions that would be imposed unless the growth in the number of vehicles slowed down.

Warnings of this kind would have little force if Britain joined the Common Market. Traders energetically competing with firms all over Europe could not afford to consider giving up any advantages that they might find from the operation of their own vehicles, and they would have the other members of E.E.C. on their side in their opposition to the threat. The Common Market seems to be the enemy of the idea of nationalization, at any rate so far as transport is concerned. Unless at this late stage Britain withdraws from her negotiations with the Six, the Socialists may find it politic to abandon the idea.