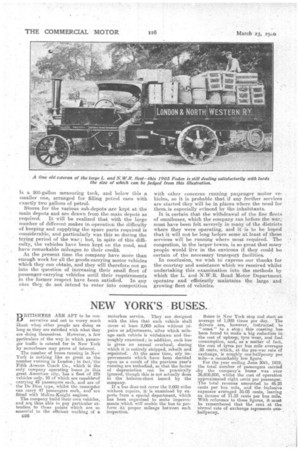 Page 12, 23rd March 1920 — NEW YORK'S BUSES.
Close
Noticed an error?
If you've noticed an error in this article please click here to report it so we can fix it.

BRITISHERS ARE APT to be conservative and not to worry much ibout what other people are doing so long as they are satisfied with what they are doing themselves.. However, a few particulars of the way in which passenger traffic is catered for in New York by motorbuses may prove of interest.

Tile number of buses, running in New York is nothing like so great as the i number running n London; in fact,' the Fifth Avenue Coach Co., which is the only company operating buses in this great American city, has a fleet of 279 vehicles only, 10 of which are capableof carrying 45 passengers each, and are of the Do Dion type, -whilst the remainder can carry 47 passengers each, and' are fitted with Moline-Knight engines.

The company build their own vehicles, and arg thus able to .pay particular attention to those points which are so essential to the efficient working Of a motorbus service. They are designed with the idea that each vehicle shall cover at least 2,00G miles without repairs or adjustments, 'after which mileage each vehicle is withdrawn and thoroughly examined; in addition, each bus is given an annual overhaul, during which it is entirely stripped, rebuilt and repainted. At the same time, any improvements which have been decided upon as a result of the previous year's running are 'embodied, so that the factor of depreciation ran be practically ignored, though this is not actually done in the balance-sheet issued by the company.

If a bus does not cover the 2,000 Miles without repairs, it, is examined by experts from a special department, which has been organized to make improvements which will enable the lone to perform its proper mileage between each inspection.

Blises in New York stop and start an average of 1,000 times per day. The drivers are, however,' instructed. to " coast " to a stop ; this coasting hae. been found to make a big reduction in the cost of upkeep, tyre -wear, and fuel consumption, and, as a matter of fact-, the cast of tyres. per bus mile averages .95 cents, which, at the pre-war rate of exchange, is roughly one-halfpenny per, mile—a remarkably low figure.

For the year ending June 30th, 1919, the total number of passengers carried by the company's buses was over 36,000,000, whilst the cost of operation approximated eight cents per passenger. The total revenue amounted, to 46.28 cents per bus mile, and the inclusive expenses averaged 35.05 cents, leaving an income of 11.23 cents per bus mile. With reference to these figures, it must be remembered that the cent at the nlirmal rate of exchange represents onehalfpenny. •