WHAT THE BOSSES AT MERCEDES SAY 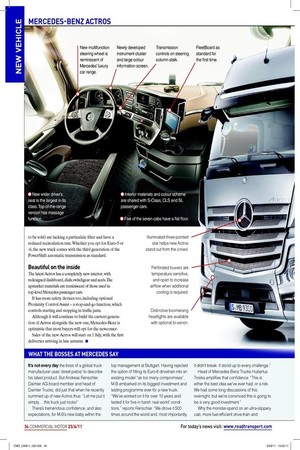 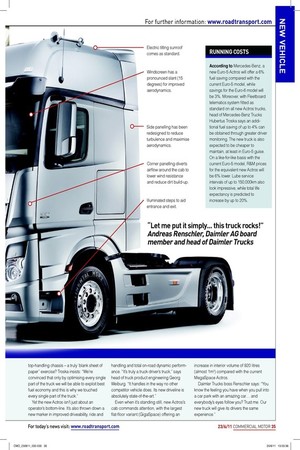 It’s not every day the boss of a global truck manufacturer uses ‘street patois’ to describe his latest product. But Andreas Renschler, Daimler AG board member and head of Daimler Trucks, did just that when he recently summed up of new Actros thus: “Let me put it simply... this truck just rocks!” There’s tremendous confidence, and also expectations, for M-B’s new baby within the top management at Stuttgart. Having rejected the option of fitting its Euro-6 drivetrain into an existing model “as too many compromises”, M-B embarked on its biggest investment and testing programme ever for a new truck. “We’ve worked on it for over 10 years and tested it for five in harsh ‘real-world’ conditions,” reports Renschler. “We drove it 500 times around the world and, most importantly, it didn’t break. It stood up to every challenge.” Head of Mercedes-Benz Trucks Hubertus Troska amplifies that confidence: “This is either the best idea we’ve ever had, or a risk. We had some long discussions of this overnight, but we’re convinced this is going to be a very good investment.” Why the monster-spend on an ultra-slippery cab, more fuel-efficient drive-train and top-handling chassis – a truly ‘blank sheet of paper” exercise? Troska insists: “We’re convinced that only by optimising every single part of the truck we will be able to exploit best fuel economy and this is why we touched every single part of the truck.” Yet the new Actros isn’t just about an operator’s bottom-line. It’s also thrown down a new marker in improved driveability, ride and handling and total on-road dynamic performance. “It’s truly a truck driver’s truck,” says head of truck product engineering Georg Weiburg. “It handles in the way no other competitor vehicle does. Its new driveline is absolutely state-of-the-art.” Even when it’s standing still, new Actros’s cab commands attention, with the largest flat-floor variant (GigaSpace) offering an

Daimler Trucks boss Renschler says: “You know the feeling you have when you pull into a car park with an amazing car... and everybody’s eyes follow you? Trust me. Our new truck will give its drivers the same experience.”