Don’t listen to Lord Sugar, engineers should be hired 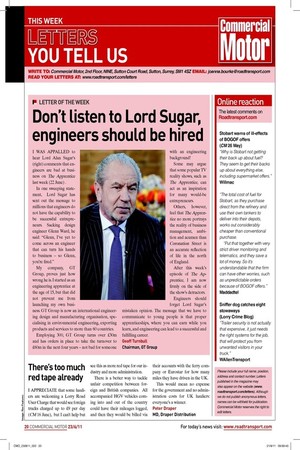 Page 17, 23rd June 2011 — Don’t listen to Lord Sugar, engineers should be hired
Close
Noticed an error?
If you've noticed an error in this article please click here to report it so we can fix it.
Keywords : The Apprentice Uk, Alan Sugar, The Apprentice, Apprenticeship, Entertainment / Culture

I WAS APPALLED to hear Lord Alan Sugar’s (right) comments that engineers are bad at business on The Apprentice last week (22 June) .

In one sweeping statement, Lord Sugar has sent out the message to millions that engineers do not have the capability to be successful entrepreneurs. Sacking design engineer Glenn Ward, he said: “Glenn, I’ve yet to come across an engineer that can turn his hands to business – so Glenn, you’re ired.” My company, GT Group, proves just how wrong he is. I started as an engineering apprentice at the age of 15, but that did not prevent me from launching my own business. GT Group is now an international engineering design and manufacturing organisation, specialising in environmental engineering, exporting products and services to more than 60 countries.

Employing 300, GT Group turns over £30m and has orders in place to take the turnover to £60m in the next four years – not bad for someone with an engineering background!

Some may argue that some popular TV reality shows, such as The Apprentice, can act as an inspiration for many would-be entrepreneurs.

Others, however, feel that The Apprentice no more portrays the reality of business management, ambition and acumen than Coronation Street is an accurate relection of life in the north of England.

After this week’s episode of The Apprentice, I am now irmly on the side of the show’s detractors.

Engineers should forget Lord Sugar’s mistaken opinion. The message that we have to communicate to young people is that proper apprenticeships, where you can earn while you learn, and engineering can lead to a successful and fulilling career.