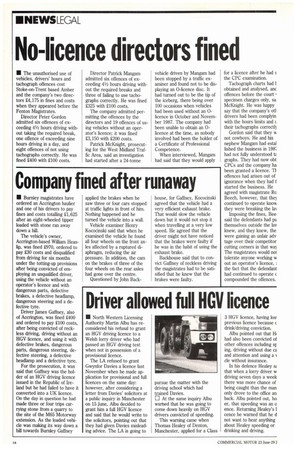 Page 20, 23rd June 1988 — Company fined after runaway
Close
Noticed an error?
If you've noticed an error in this article please click here to report it so we can fix it.
Keywords : Car Safety, Railway Brake, Mot Test, Headlamp, Law / Crime

• Burnley magistrates have ordered an Accrington haulier and one of his drivers to pay fines and costs totalling 21,625 after an eight-wheeled tipper loaded with stone ran away down a hill.

The vehicle's owner, Accrington-based William Heaslip, was fined 2970, ordered to pay 230 costs and disqualified from driving for six months under the totting-up provisions after being convicted of employing an unqualified driver, using the vehicle without an operator's licence and with dangerous parts, defective brakes, a defective headlamp, dangerous steering and a defective tyre, Driver James Gaffney, also of Accrington, was fined 2400 and ordered to pay 2100 costs, after being convicted of reckless driving, driving without an HGV licence, and using it with defective brakes, dangerous parts, dangerous steering, defective steering, a defective headlamp and a defective tyre.

For the prosecution, it was said that Gaffney was the holder of an HGV driving licence issued in the Republic of Ireland but he had failed to have it converted into a UK licence. On the day in question he had made three or four trips carrying stone from a quarry to the site of the M65 Motorway extension. As the loaded vehicle was making its way down a hill towards Burnley Gaffney applied the brakes when he saw three or four cars stopped at traffic lights in front of him. Nothing happened and he turned the vehicle into a wall.

Vehicle examiner Henry Kococinski said that when he examined the vehicle he found all four wheels on the front axles affected by a ruptured diaphragm, reducing the air pressure. In addition, the cam on the brakes of three of the four wheels on the rear axles had gone over the centre.

Backhouse said that to convict Gaffney of reckless driving the magistrates had to be satisified that he knew that the brakes were faulty.