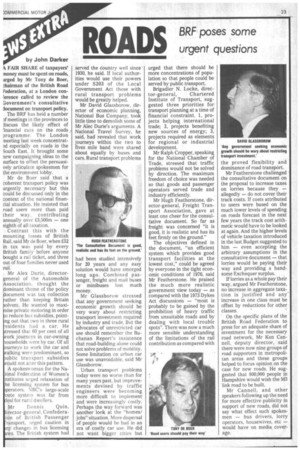 by John Darker k FAIR SHARE of taxpayers' , Tioney must be spent on roads, urged by Mr Tony de Boer, thairman of the British Road Federation, at a London conerence called to review the Governmen t's consultative lOcument on transport policy.

The BRF has held a number )f meetings in the provinces to liscuss the likely effect of Financial cuts on the roads : programme. The London meeting last week concentrated especially on roads in the South East. It brought some new campaigning ideas to the 3urface to offset the persuasively articulate spokesmen for the environment lobby.

Mr de Boer said that a coherent transport policy was urgently necessary but this could be discussed only in the context of the national financial situation. He insisted that . road users more than paid their way, contributing annually over £3,500m — one eighth of all taxation.

Contrast this with the mounting losses of British Rail, said Mr de Boer, when £52 in tax was paid by every British family before anyone bought a rail ticket, and three out of four families never used rail.

Mr Alex Dune, directorgeneral of the Automobile Association, thought the dominant theme of the policy document was tax collection rather than keeping Britain 3olvent. He wanted to maximise private motoring in order xi reduce bus subsidies, pointng out that two in three rural -esidents had a. car. He ;tressed that 60 per cent of all work journeys in car-owning iouseholds were by car. Of all ourneys to work the car and walking were predominant, so 3ublic transport subsidies would not alter this pattern.

A spokeswoman for the Ma-. ional Federation of Women's nstitutes urged relaxation of he licensing system for bus .merators. NBC's large-scale .oute system was far from Iieal for rural dwellers. Mr Dennis Quin, irector-general, Confedera on of British Passenger ransport, urged caution in ny changes in bus licensing ws. The British system had served the country well since' 1930, he said. If local authorities would use their powers under S203 of the Local Government Act those with rural transport problems would be greatly helped.

Mr David Glassborow, director of economic planning, National Bus Company, took little time to demolish some of Mr Alec Dune's arguments. A National Travel Survey, he said, had revealed that work journeys within the two to fives mile band were shared about equally by buses and cars. Rural transport problems had been studied intensively for 20 years and any easy solution would have emerged long ago. Combined passenger, freight and mail buses Or minibuses lost much money.

Mr Glassborow stressed that any government seeking economic growth should be very wary about restricting transport investment required by industry and trade. But the advocates of unrestricted car use should remember the Buchanan Report's insistence that road-building alone could not solve problems of mobility. Some limitation on urban car use was unavoidable, said Mr Glassborow.

Urban transport problems today were no worse than for many years past, but improvements devised by traffic engineers were becoming more difficult to implement' and were increasingly costly. Perhaps the way forward was another look at the "homes/ jobs" situation. More dispersal of people would be bad in an era of costly car use. He did not want bigger cities but urged that there should be more concentrations of population so that people could be served by public transport.

Mr Ralph Cropper, speaking for the National Chamber of Trade, stressed that traffic problems would not be solved by direction. The maximum freedom of choice was needed so that goods and passenger operators served trade and industry efficiently.

Mr Hugh Featherstone, director-general, Freight Transport Association, gave at least one cheer for the consultative document. So far as freight was concerned "it is good, it is realistic and has its feet firmly on the ground."

The objectives defined in the document, "an efficient system which provides good transport facilities at the lowest cost," could be agreed by everyone in the tight economic conditions of 1976, said Mr Featherstone. He praised the much more realistic government view today — as compared with the 1973 Dykes Act discussions — "most is probably to be gained by the prohibition of heavy traffic from unsuitable roads and by dealing with local trouble spots". There was now a much more sensible understanding of the limitations of the rail contribution as compared with the proved flexibility and dominance of road transport.

Mr Featherstone challenged the consultative document on the proposal to increase taxes on lorries because they — allegedly — do not cover their track costs. If costs attributed to users were based on the much lower levels of spending on roads forecast in the next few years the track cost arithmetic would have to be looked at again. And the higher levels of vehicle taxation introduced in the last Budget suggested to him — even accepting the arbitrary assumptions in the • consultative document — that lorries would be paying their way and providing a handsome Exchequer surplus.

If lorries as a whole pay their way, argued Mr Featherstone, no increase in aggregate taxation is justified and any' increase in one class must be offset by reductions for other classes.

On the specific plans of the British Road Federation to press for an adequate share of investment for the necessary road network, Mr Ken Cannell, deputy director, said there were now nine groups of road supporters in metropolitan areas and these groups helped to focus opinion on the case for new roads. He suggested that 800,000 people in Hampshire would wish the M3 link road to be built.

Mr Cannell, and other speakers following up the need for more effective publicity in support of new roads, did not say what effect such spokesmen — bus drivers, lorry operators, housewives, etc — would have on media coverage.