Evidence on Rates: Position Made Clear 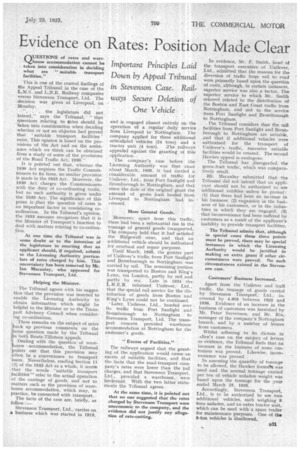 Page 45, 23rd July 1937 — Evidence on Rates: Position Made Clear
Close
Noticed an error?
If you've noticed an error in this article please click here to report it so we can fix it.
Keywords : Local Government In England, Counties Of England, Nottingham, Geography Of England, Bromborough, Tribunal, Transport, Law / Crime, Business / Finance

Important Principles Laid Down by Appeal Tribunal in Stevenson Case, Railways Secure Deletion of One Vehicle oitJESTIONS of rates and ware house accommodation cannot be taken into consideration in deciding what are " suitable transport facilities."

This is one of the central findings of the Appeal Tribunal in the case of the L.M.S. and L.N.E. Railway companies versus Stevenson Transport, Ltd. The decision was given at Liverpool, on Monday.

• ". . . the legislature did not intend," says the Tribunal, "that questions relating to rites should be 'taken into consideration when deciding whether or not an objector had proved that ' suitable transport facilities ' exist. This opinion is based on the provisions of the Act and on the assistance which we think can be obtained from a study of some of the provisions of the Road Traffic Act, 1930."

It is pointed out that, whereas the 1930 Act requires the Traffic Commiesiotiers to fix fares, no similar provision is made in the 1933 Act. Moreover,. the 1930 Act charges the Commissioners with the duty of co-ordinating traffic, but no such authority is given under the 1933 Act. The significance of this point is that the question of rates is an important factor in considering coordination. In the Tribunal's opinion, the 1933 measure recognizes that it is the Minister of Transport's function to deal with matters relating to eo-ordinaeion.

At one time the Tribunal was in some doubt as to the intention of the legislature in enacting that an applicant should, if required, submit to the Licensing Authority particulars of rates charged by him. This uncertainty has been removed by Mr. Ian Macaulay, who appeared for Stevenson Transport, Ltd.

The Tribunal agrees with his suggestion that the provision was inserted to enable the Licensing Authority to obtain information which might be helpful to the Minister or to the Transport Advisory .Council when considering co-ordination.

. These remarks on the subject of rates %ack up previous comments on the

iame question made by the Tribunal In both Bouts-Tillotson appeals. .1 Dealing with the question of waretiouse accommodation, the Tribunal

• points out that this provision may often be a convenience to transport users. Nevertheless, reading Section 11 (2) of the 1933 Act as a whole, it scenes that the words "suitable transport facilities " refer to the actuaI operation of the carriage of goods, and not to matters such as the provision of warehouse accommodation, which may, in practice, be connected with transport..

The facts of the case are, briefly, as follow:—

Stevenson Transport, Ltd., carries on a business which was started in 1919, and is engaged almost entirely on the operation of a regular daily service from Liverpool to Nottingham. The company applied for three additional articulated vehicles (24 tons) and a tractor unit (4 tons). .The railways appealed against the granting of this application.

The company's case before the Licensing Authority was that since about March, 1935, it had carried a considerable amount of traffic for Unilever, Ltd., from Port Sunlight and 13romborough to Nottingham, and that since the date of the original grant the amount of green fruit hauled from Liverpool to Nottingham had increased.

Moreover, apart from this traffic, there had been a substantial rise in the tonnage of general goods transported. The company held that it had satisfied the Ridgewell onus, and that an additional vehicle should be authorized for overhaul and repair purposes.

Until March, 1935, the greater part of Unilever's traffic from Port Sunlight and Bromborough to Nottingham was carried by rail. The remaining portion was transported to Boston and King's Lynn, via London, partly by rail and partly by sea. Late in 1934 the L.N.E.R. informed Unilever, Ltd., that the special rail service for the distribution of goods from Boston and King's Lynn could not be continued, • Later, Unilever, Ltd., handed over its traffic from Port Sunlight and Promborough to Nottingham to Stevenson Transport, Ltd. The transport concern provided warehouse accommodation at Nottingham for the customer's goods.

The railways argued that the granting of the application would cause an excess of suitable facilities, and that the facts that the road-transport company's rates were lower than the -rail charges, and that Stevenson Transport, Ltd., provided a warehouse, were irrelevant. With the two latter statements the Tribunal agrees.

At the same time, it is pointed out that no one suggested that the rates charged by Stevenson Transport were uneconomic to the company, and the evidence did not justify any allegation of rate-cutting.

In evidence, Mr. F. Smith, head of the transport executive of Unilever, Ltd., admitted that the reasons for the diversion of traffic froen rail to road were primarily based upon the question of costs, alehough, in certain instances, superior service was also a factor. The superior serv,ice to which Mr. Smith referred related to the distribution of the Boston and East Coast traffic from Nottingham, and not to the service from Port Sunlight and Bromborough to Nottingham.

. The Tribunal considers that the rail facilities from Port Sunlight and Bromborough to Nottingham are suitable, and that if additional vehicles were authorized for the transport of Unilever's, traffic, excessive suitable facilities would be created. The second Hawker appeal is analogous.

The Tribunal has disregarded the green-fruit traffic, which was comparatively small.

Mr. Macaulay submitted that the Tribunal did not intend that an applicant should not be authorized to use additional vehieles. unless he proved: (1) that there had been an increase in his business, (2) expansion in the business of his customers, or in the industries in which they are engaged, (3) that inconvenience had been suffered by customers as a result of the applicant's inability to provide transport facilities.

The Tribunal admits that, although in special eases these three points must be proved, there may be special instances in which the Licensing Authority would be justified in making an extra grant if other circumstances were proved. No such circumetances existed in the Stevenson case.

Apart from the Unilever and fruit traffic, the tonnage of goods carried by Stevenson Transport, Ltd., increased by 4.805 between 1935 and 1936. Evidence of an increase in the business of customers was furnished by Mr. Peter Stevenson, and Mr. Rix, manager of the company's Nottingham branch, and by a number of letters from customers.

Whilst adhering to its dictum in Allen's case on the subject of letters as evidence, the Tribunal finds that an increase in the business of some customers was proved. Likewise, inconvenience was proved.

In assessing the quantity of tonnage to be allowed, the Hawker formula was used and the normal tonnage carried per ton of vehicle unladen weight was based upon the tonnage for the year ended March 25, 1935.

Accordingly, Stevenson Transport, Ltd., is to be authorized to use two additional vehicles, each weighing 8 tons unladen, and an extra tractor unit, which can be used with a spare trailer for maintenance purposes. One of the S-ton vehicles is disallowed.