Central Control for Roads and Cleansing in London Proposed 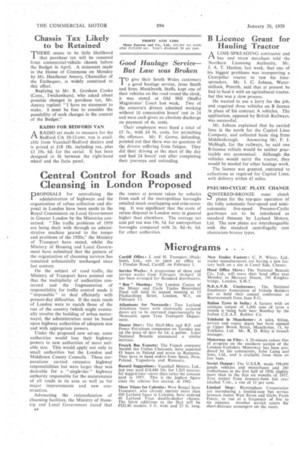 Page 142, 23rd January 1959 — Central Control for Roads and Cleansing in London Proposed
Close
Noticed an error?
If you've noticed an error in this article please click here to report it so we can fix it.

PROPOSALS for centralizing the administration of highways and the organization of refuse collection and disposal in London have been made to the Royal Commission on Local Government in Greater London by the Ministries concerned. "The traffic problems of 1959 are being dealt with through an administrative machine geared to the tempo and problems of the 1920s," the Ministry of Transport have stated, whilst the Ministry of Housing and Local Government have submitted that the pattern of the organization of cleansing services has remained substantially unchanged since last century.

On the subject of road traffic, the

• Ministry of Transport have pointed out that the multiplicity of authorities concerned and the fragmentation of responsibility for traffic control made it " impossible " to deal efficiently with present-day difficulties. If .fl e main roads of London were to match those of the rest of the country (which might eventually involve the building of urban motorways), the administration must be based upon highway authorities of adequate size and with appropriate powers.

Under the proposed new set-up, some authorities would lose their highway powers to new authorities of more suitable size. This would apply not only to small authorities but the London and Middlesex County Councils. These corporations carried extensive highway responsibilities but were larger than was desirable for a " single-tier " highway authority responsible for the maintenance of all roads in its area as well as for major improvements and new construction.

Advocating the rationalization of cleansing facilities, the Ministry of Housing and Local Government stated that the routes at present taken by vehicles from each of the metropolitan boroughs entailed much overlapping and criss-crossing. It was significant that the• costs of refuse disposal in London were in general higher than elsewhere. The average net cost pr ton was 19s. 5d. for metropolitan boroughs compared with 2s. Sd.-4s. 6d. for other authorities.