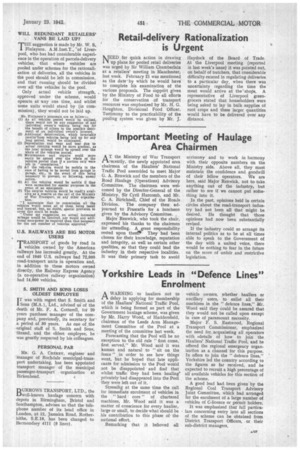 Page 19, 23rd January 1942 — Yorkshire Leads in "Defence Lines" Enrolment
Close
Noticed an error?
If you've noticed an error in this article please click here to report it so we can fix it.
Keywords : Motoring Taxation In The United Kingdom

AWARNING to hauliers not to delay in applying for membership of the Hauliers' National Traffic Pool. which is being formed as part of the Government haulage scheme, was given by Mr. Harry Wood, of Huddersfield, chairman of the Leeds Area Management Committee of the Pool at a meeting of the committee last week.

Forecasting that the Pool will be no exception to the old rule " first come, first served," Mr. Wood said it was human and natural to " sit on the fence " in order to see bow things went, but he hoped that late applicants for admission to the Pool would not be disappointed and find that whilst traffic they had been hauling* privately had disappeared into the Pool they were left out of it.

Stressing at the same time the call for immediate enrolment of vehicles in the " hard core " of chartered machines, Mr. Wood said it was a matter of conscience for every haulier, large or small, to decide what should be his contribution to this phase ofthe national effort.

Remarking that it behoved all

vehicle owners, whether hauliers or ancillary users, to enlist all their machines in the " defence lines," Mr. ‘Vood said they could be assured that they would not be called upon except in case of paramount necessity.

Major F. S. Eastwood, Regional Transport Commissioner, emphasized the need for. acquainting all operators with .details of how to join the Hauliers' National Traffic Pool, and he offered the regional emergency organization as a channel for this purpose. In offers to join the " defence lines," Yorkshire led the country according to the figures so far received, and he expected to recruit a high percentage of all available vehicles for this section of the scheme.

A good lead had been given by the Regional Coal Transport Advisory Joint Committee, which had arranged for the enrolment of a large number of vehicles of C-licence or permit holders.

It was emphasized that full particulars concerning entry into all sections of the scheme can be obtained from District Transport Officers, or their sub-district managers,