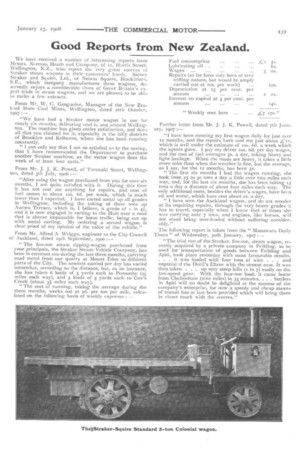 Page 15, 23rd January 1908 — Good Reports from New Zealand.
Close
Noticed an error?
If you've noticed an error in this article please click here to report it so we can fix it.
Keywords : Steam Wagon

We have received a number of interesting reports from Messrs. Norman Heath and Company, of ix, Harris Street, Wellington, N.Z., who report the very great success of Straker steam wagons in their customers' hands. Sidney Straker and Squire, Ltd., of Nelson Square, I3lackfriars, S.F.., which company manufactures these wagons, deservedly enjoys a considerable share of Great Britain's export trade in steam wagons, and we are pleased to be able to make a few extracts.

From Mr, W. C. Gasguoine, Manager of the New Zenhad State Coal Mines, Wellington, dated 16th October, 1907 : "We have had a Straker motor wagon in use for nearly six mouths, delivering coal le and around Wellington. The machine has given entire satisfaction, and done all that you claimed for it, especially in the hilly districts of Brooklyn and Kelburne, where she has been running constantly.

" I can only say that I am so satisfied as to the saving, that I have recommended the Department to purchase another Straker machine, as the motor wagon does the work of at least four carts."

From Mr. J. J. K. Powell, of Taranaki Street, Wellington, dated 5th July, 1906 "After using the wagon purchased from you for over six months, I am quite satisfied with it. During this time it has not cost me anything for repairs, and cost of fuel comes to about 128. 6d. per week, which is much lower than I expected. I have carted metal up all grades in Wellington, including the taking of three tons up Aurora Terrace, which is, I believe, a grade of i in 41-e and it is now engaged in carting to the Hutt over a road that is almost impassable for horse traffic, being cut up with metal carting. My ordering a second wagon is clear proof of my opinion of the value of the vehicle."

From Mr. Alfred A, Wriggs, engineer to the City Council of Auckland, dated 19th September, 1906 :-

" The five-ton steam tipping-wagon purchased from your principals, the Straker Steam Vehicle Company, has been in constant use during the last three months, carrying road metal from our quarry at Mount Eden to different parts of the City. The amount carried per day has varied somewhat, according to the distance, but, as an instance, she has taken 6 loads of 5 yards each to Ponsonby (211 miles eaell way), and 5 loads of 5 yards each to Cox's Creek (about 31 miles each way).

"The cost of running, taking the average during the three months, works out at 2d. per ton per mile, calculated on the following basis of weekly expenses :-- Fuel consumption Lubricating oil . . 6s.

Further letter from Mr. J. J. K. Powell, dated 7th January, 1907 "I have been running my first wagon daily for just over 12 months, and the repairs have cost me just about which is well under the estimate of tos. 6d. a week which the agents gave. I pay my driver los. 6d. per day wages, and the cost of fuel averages 5s. a day, taking heavy and light haulage. When the roads are heavy, it takes a little more coke than when the weather is fine, but the average, as I say, for the 12 months' has been 5s. "The first six months I had the wagon running, she took from 25 to 30 tons a day a little over two miles each way, and, for the last six months, she has been taking 15 tons a day .a distance of about four miles each way. The only additional costs, besides the driver's wages, have been oil and water, which have cost about 25, a day.

"I have seen the Auckland wagon, and do not wonder at its requiring repairs, through the very heavy grades it has to travel, especially when I know that at times she was carrying over 7 tons, and engines, like horses, will not stand being over-leaded without suffering considerably."

The following report is taken from the " Manawatu Daily Times" of Wednesday, 3oth January, 1907 :-

"The trial run of the Straker, five-ton, steam wagon, recently acquired by a private company in Fading, to be used for transportation of goods between Feilding and Apiti, took place yesterday with most favourable results. , . . it was loaded with four tons of wire . . . and neg-otiated the Devil's Elbow with the utmost ease. It was

then taken . . up very steep hills (1 in 7) easily on the low-speed gear. With the four-ton load, it came home

from Cheltenham (nine miles) in 55 minutes Settlers in Apiti will no doubt be delighted at the success of the company's enterprise, for now a speedy and cheap means of transit has at last been provided which will bring them in closer touch with the centres."