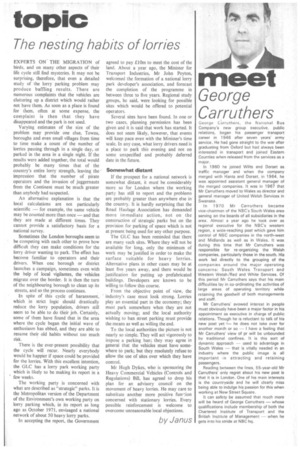 Page 39, 23rd February 1973 — topic
Close
Noticed an error?
If you've noticed an error in this article please click here to report it so we can fix it.
Keywords : Truck, Lorry, Parking

The nesting habits of lorries

EXPERTS ON THE MIGRATION of birds, and on many other aspects of their life cycle still find mysteries. It may not be surprising, therefore, that even a detailed study of the lorry parking problem may produce baffling results. There are numerous complaints that the vehicles are cluttering up a district which would rather not have them. As soon as a place is found for them, often at some expense, the complaint is then that they have disappeared and the park is not used.

Varying estimates of the size of the problem may provide one clue. Towns, boroughs and even small villages from time to time make a count of the number of lorries passing through in a single day, or parked in the area in a single night. If the results were added together, the total would probably be many times that of the country's entire lorry strength, leaving the impression that the number of pirate operators and the invasion of juggernauts from the Continent must be much greater than anybody had suspected.

An alternative explanation is that the local calculations are not particularly scientific — for example, the same vehicle may be counted more than once — and that they are made at different times. They cannot provide a satisfactory basis for a national survey.

Sometimes the London boroughs seem to be competing with each other to prove how difficult they can make conditions for the lorry driver wanting to park. The effect has become familiar to operators and their drivers. When one borough or district launches a campaign, sometimes even with the help of local vigilantes, the vehicles migrate over the border. It is then the turn of the neighbouring borough to clean up its streets, and so the process continues.

In spite of this cycle of harassment, which in strict logic should drastically reduce the lorry population, drivers still seem to be able to do their job. Certainly, some of them have found that in the area where the cycle began the initial wave of enthusiasm has ebbed, and they are able to resume their old habits without too much risk.

There is the ever-present possibility that the cycle will recur. Nearly everybody would be happier if space could be provided for the lorries. With this excellent intention, the GLC has a lorry park working party which is likely to be making its report in a few weeks.

The working party is concerned with what are described as "strategic" parks. It is the Metropolitan version of the Department of the Environment's own working party on lorry parking which, in its report as long ago as October 1971, envisaged a national network of about 50 heavy lorry parks.

In accepting the report, the Government agreed to pay £10m to meet the cost of the land. About a year ago, the Minister for Transport Industries, Mr John Peyton, welcomed the formation of a national lorry park developer's association, and forecast the completion of the programme in between three to five years. Regional study groups, he said, were looking for possible sites which would be offered to potential operators.

Several sites have been found. In one or two cases, planning permission has been given and it is said that work has started. It does not seem likely, however, that events will keep pace even with the Minister's time scale. In any case, what lorry drivers need is a place to park this evening and not on some unspecified and probably deferred date in the future.

Somewhat distant If the prospect for a national network is somewhat distant, it must be considerably more so for London where the working party has still to report and the problems are probably greater than anywhere else in the country. It is hardly surprising that the Road Haulage Association has demanded more immediate action, not on the construction of strategic parks but on the provision for parking of space which is not at present being used for any other purpose.

The GLC has been reminded that there are many such sites. Where they will not be available for long, only the minimum of work may be justified in order to make the surface suitable for heavy lorries. Alternative plans in other cases may be at least five years away, and there would be justification for putting up prefabricated buildings. Developers are known to be willing to follow this course.

From the objective point of view, the industry's case must look strong. Lorries play an essential part in the economy; they must park somewhere when they are not actually moving; and the local authority wishing to ban street parking must provide the means as well as willing the end.

To the local authorities the picture is not nearly so simple. They will act vigorously to impose a parking ban; they may agree in general that the vehicles must have somewhere to park; but they resolutely refuse to allow the use of sites over which they have control.

Mr Hugh Dykes, who is sponsoring the Heavy Commercial Vehicles (Controls and Regulations) Bill, has agreed to drop his plan for an advisory council on the movement of heavy lorries. He may care to substitute another more positive function concerned with stationary lorries. Every possible reinforcement is welcome to overcome unreasonable local objections.