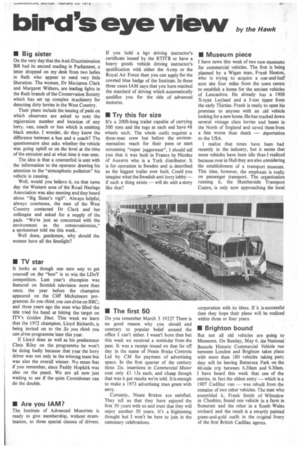 Page 33, 23rd February 1973 — bird's eye view by the Hawk
Close
Noticed an error?
If you've noticed an error in this article please click here to report it so we can fix it.
Keywords : Truck, Semi-trailer Truck, Institute Of Advanced Motorists, Lorry, Large Goods Vehicle, Commercial Vehicle

On the very day that the Anti-Discrimination Bill had its second reading in Parliament, a letter dropped on my desk from two ladies in Bath who appear to need very little liberation. The women, Dr Marianna Clark and Margaret Withers, are leading lights in the Bath branch of the Conservation Society which has set up complex machinery for detecting dirty lorries in the West Country.

Their plans include the issuing of pads on which observers are asked to note the registration number and location of any lorry, van, coach or bus which is emitting black smoke. I wonder, do they know the difference between a bus and a coach? The questionnaire also asks whether the vehicle was going uphill or on the level at the time of the emission and at what time it was seen.

The idea is that a counterfoil is sent with the information to the operator drawing his attention to the "atmospheric pollution" his vehicle is causing.

Well, would you believe it, on that same day the Western area of the Road Haulage Association was also meeting and they heard about "Big Sister's vigil". Always helpful, always courteous, the men of the West Country contacted Dr Clark and her colleague and asked for a supply of the pads. "We're just as concerned with the environment as the conservationists," a spokesman told me this week.

Well done, gentlemen, why should the women have all the limelight?

It looks as though one sure way to get yourself on the "box" is to win the LDoY competition. Last year's champion was featured on Scottish television more than once; the year before the champion appeared on the Cliff Michelmore programme So you think you can drive on BBC; and three years ago the man who lifted the title tried his hand at hitting the target on ITV's Golden Shot. This week we learn that the 1972 champion, Lloyd Richards, is being invited on to the So you think you can drive programme later this year.

If Lloyd does as well as his predecessor Chris Riley on the programme he won't be doing badly because that year the lorry driver was not only in the winning team but was also the overall winner. No mean feat if you remember, since Paddy Hopldrk was also on the panel. We are all now just waiting to see if the quiet Cornishman can do the double.

The Institute of Advanced Motorists is ready to give membership, without examination, to three special classes of drivers. If you hold a hgv driving instructor's certificate issued by the RTITB or have a heavy goods vehicle driving instructor's qualification with either the Army . or the Royal Air Force then you can apply for the coveted blue badge of the Institute. In these three cases IAM says that you have reached the standard of driving which automatically qualifies you for the title of advanced motorist.

• Try this for size

It's a 200ft-long trailer capable of carrying 500 tons and the tugs at each end have 48 wheels each. The whole outfit requires a three-man crew but before the environmentalists reach for their pens or start screaming "super juggernaut", I should tell you that it was built in France by Nicolas of Auxerre who is a York distributor. It is for operation in Sweden and is described as the biggest trailer ever built. Could you imagine what the Swedish anti-lorry lobby — if such a thing exists — will do with a story like that?

Do you remember March 3 1922? There is no good reason why you should and contrary to popular belief around the office I can't either. I wasn't born then but this week we received a reminder from the past. It was a receipt issued on that far off day in the name of Neate Brake Controls Ltd by CM for payment of advertising space. In the first quarter of the century three 2in. insertions in Commercial Motor cost only 1 13s each, and cheap though that was it got results we're told. It is enough to make a 1973 advertising man green with envy.

Certainly, Neate Brakes are satisfied. They tell us that they have enjoyed the first 50 years with us and trust that they will enjoy another 50 years. It's a frightening thought but I won't be here to join in the centenary celebrations.

I have news this week of two new museums for commercial vehicles. The first is being planned by a Wigan man, Frank Heaton, who is trying to acquire a one-and-half acre site four miles from the town centre to establish a home for the ancient vehicles of Lancashire. He already has a 1908 X-type Leyland and a 5-ton tipper from the early Thirties. Frank is ready to open his premises to anyone with an old vehicle looking for a new home. He has tracked down several vintage class lorries and buses in the North of England and saved them from a fate worse than death — deportation to the USA.

I realize that times have been bad recently in the industry, but it seems that more vehicles have been idle than I realized because over in Hull they are also considering the establishment of a transport museum. This time, however, the emphasis is really on passenger transport. The organization running it, the Humberside Transport Centre, is only now approaching the local corporation with its ideas. If it is successful then they hope their plans will be realized within three or four years.

But not all old vehicles are going to Museums. On Sunday, May 6, the National Bensole Historic Commercial Vehicle run between London and Brighton takes place with more than 180 vehicles taking part; they will be leaving Battersea Park on the 60-mile trip between 6.30am and 9.30am. I have heard this week that one of the entries, in fact the oldest entry — which is a 1907 Cadillac van — was rebuilt from the remains of two other vehicles. The man who assembled it, Frank Smith of Wilmslow in Cheshire, found one vehicle in a farm in Somerset and the other in a South Wales orchard and the result is a smartly painted green-and-gold outfit in the original livery of the first British Cadillac agents.