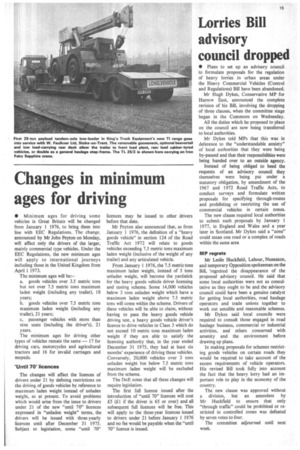 Page 17, 23rd February 1973 — Lorries Bill advisory council dropped
Close
Noticed an error?
If you've noticed an error in this article please click here to report it so we can fix it.
Keywords : Les Huckfield, Truck, Haulage, Motoring Taxation In The United Kingdom

• Plans to set up an advisory council to formulate proposals for the regulation of heavy lorries in urban areas under the Heavy Commercial Vehicles (Control and Regulations) Bill have been abandoned.

Mr Hugh Dykes, Conservative MP for Harrow East, announced the complete revision of his Bill, involving the dropping of three clauses, when the committee stage began in the Commons on Wednesday.

All the duties which he proposed to place on the council are now being transferred to local authorities.

Mr Dykes told MPs that this was in deference to the "understandable anxiety" of local authorities that they were being by-passed and that their responsibilities were being handed over to an outside agency.

Instead of being obliged to heed the requests of an advisory council they themselves were being put under a statutory obligation, by amendment of the 1967 and 1972 Road Traffic Acts, to conduct surveys and formulate written proposals for specifying through-routes and prohibiting or restricting the use of commercial vehicles in certain zones.

The new clause required local authorities to submit such proposals by January 1 1977, in England and Wales and a year later in Scotland. Mr Dykes said a "zone" could mean one road or a complex of roads within the same area

Mr Leslie Huckfield, Labour, Nuneaton, and temporary Opposition spokesman on the Bill, 'regretted the disappearance of the proposed advisory council. He said that some local authorities were not as consultative as they ought to be and the advisory council could have been a genuine catalyst for getting local authorities, road haulage operators and trade unions together to work out sensible and reasonable schemes.

Mr Dykes said local councils were required to consult those engaged in road haulage business, commercial or industrial activities, and others concerned with amenity and the environment before drawing up plans.

In making proposals for schemes restricting goods vehicles on certain roads they would be required to take account of the excess requirements of vehicle operators. His revised Bill took fully into account the fact that the heavy lorry had an important role to play in the economy of the country.

The new clause was approved without a division, but an amendent by Mr Huckfield to ensure that only "through traffic" could be prohibited or restricted in controlled zones was defeated by seven votes to four.

The committee adjourned until next week.