CI Has any official forecast been given 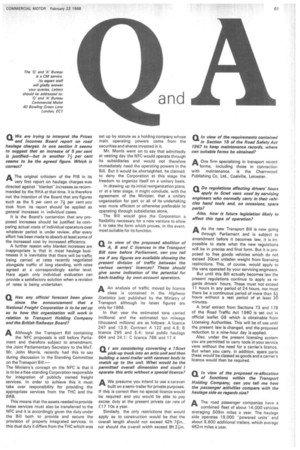 Page 63, 23rd February 1968 — CI Has any official forecast been given
Close
Noticed an error?
If you've noticed an error in this article please click here to report it so we can fix it.
Keywords : Transport Holding Company, Thc, National Freight Corporation, Nfc, United Kingdom, Business / Finance

since the announcement that a National Freight Corporation is to be set up as to how this organization will work in relation to Transport Holding Company and the British Railways Board?

A Although the Transport Bill containing the NFC proposals is still before Parliament and therefore subject to amendment, the Joint Parliamentary Secretary to the MoT, Mr. John Morris, recently had this to say during discussion in the Standing Committee on the Transport Bill:—

The Ministry's concept on the NFC is that it is to be a free-standing Corporation responsible for integration of publicly owned freight services. In order to achieve this it must take over responsibility for providing the appropriate services from the THC and the B R B.

This means that the assets needed to provide these services must also be transferred to the NFC and it is accordingly given the duty under the Bill both to provide and secure the provision of properly integrated services. In this dual duty it differs from the THC which was set up by statute as a holding company whose main operating powers came from the securities and shares invested in it.

Mr. Morris went on to say that admittedly at vesting day the NFC would operate through its subsidiaries and would not therefore immediately need the operating powers in the Bill. But it would be shortsighted, he claimed, to deny the Corporation at this stage the freedom to organize itself on a unitary basis.

In drawing up its initial reorganization plans, or at a later stage, it might conclude, with the agreement of the Minister, that a unitary organization for part or all of its undertaking was more efficient or otherwise preferable to operating through subsidiaries alone.

The Bill would give the Corporation a flexibility necessary for a new venture to allow it to take the form which proves, in the event, most suitable for its function.