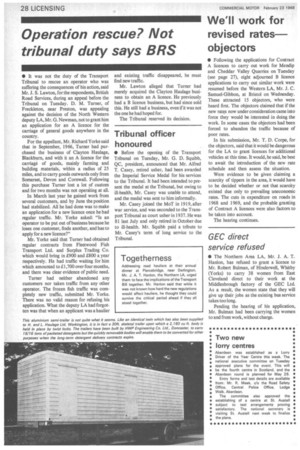 Page 30, 23rd February 1968 — Tribunal officer honoured
Close
Noticed an error?
If you've noticed an error in this article please click here to report it so we can fix it.
Keywords : Law / Crime, Human Interest, War / Conflict

• Before the opening of the Transport Tribunal on Tuesday, Mr. G. D. Squibb, QC, president, announced that Mr. Alfred T. Casey, retired usher, had been awarded the Imperial Service Medal for his services to the Tribunal. It had been intended to present the medal at the Tribunal, but owing to ill-health, Mr. Casey was unable to attend, and the medal was sent to him informally.

Mr. Casey joined the MoT in 1919, after war service, and was seconded to the Transport Tribunal as court usher in 1937. He was 81 last July and only retired in October due to ill-health. Mr. Squibb paid a tribute to Mr. Casey's term of long service to the Tribunal.