A Desert Service by Oil-engined Vehicles. 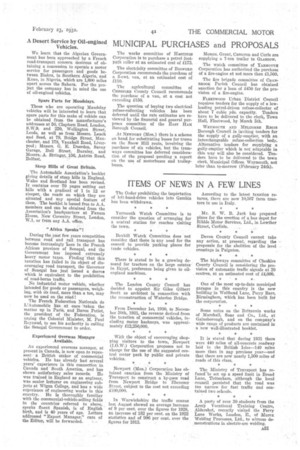 Page 33, 23rd February 1932 — A Desert Service by Oil-engined Vehicles.
Close
Noticed an error?
If you've noticed an error in this article please click here to report it so we can fix it.
Keywords : Motor Tax In The Republic Of Ireland, Taxation In The Republic Of Ireland, The Automobile Association, Transport, Senegal, Vehicle, Fanum House, Street

We learn that the Algerian Government has been approached by a French road-transport concern desirous of obtaining a concession to operate a motor service for passengers and goods between Biskra, in Southern Algeria, and Kano, in Nigeria, which are 1,600 miles apart across the Sahara. For the project the company has in mind the use of oil-eugined vehicles.

Those who are operating Mendslay vehicles will be interested to learn that spare parts for this make of vehicle can be obtained from the manufacturer's addresses at 50, Clapham Road, London, S.W.g, and 220, Wellington Street, Leeds, as well as from Messrs. Leach and Seed, at 79, Bridge Street, Manchester, and 178, Vauxhall Road, Liverpool; Messrs. G. E. Duerden, Savoy Garage, Bull Street, Burnley, and Messrs. A. Stringer, 156, Antrim Road, Belfast.

The Automobile Association's booklet giving details of steep hills in England, Wales and Scotland has been revised. It contains over 70 pages setting out hills with a gradient of 1 in 12 or steeper, the roads on which they are situated and any special feature of them. The booklet is issued free to A.A.. members and can be obtained from the Association's headquarters at Fanum House, New Coventry Street, London, W.1, or from any A.A. office.

During the past few years competition between road and rail transport has become increasingly keen in the French African province of Senegal, and the Government has imposed extremely heavy motor taxes. Finding' that this taxation has failed in its object of discouraging road transport, the Governor of Senegal has just issued a decree which is equivalent to the prohibition of road-borne traffic.

No industrial motor vehicle, whether intended for goods or passengers, weighing, with, its load, more than a ton, may now be used on the road!

The French Federation Nationale de L'Automobile has at once taken the matter up in Paris, and Baron Petiet, the president of the Federation, is urging the Colonial Minister, M. Paul Reynaud, to use his authority in calling the Senegal Government to order.