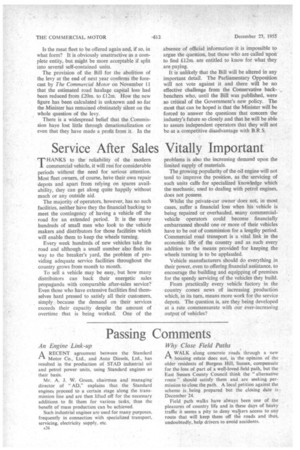 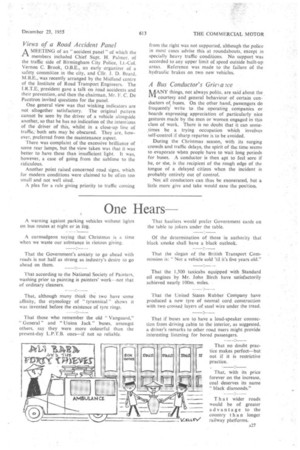 A RECENT agreement between the Standard 1-1. Motor Co., Ltd., and Auto Diesels, Ltd., has resulted in the production of STAD industrial oil and petrol power units, using Standard engines as their basis.

Mr. A. I. W. Green, chairman and managing' director of "AD," explains that the Standard engines proceed to a certain stage along the transmission line and are then lifted off for the necessary additions to fit them for various tasks, thus the benefit of mass production can be achieved.

Such industrial engines are used for many purposes, frequently in connection with specialized transport, servicing, electricity supply, etc.

AWALK along concrete roads through a new housing estate does not, in the opinion of the older residents of Burgess Hill, Sussex, compensate for the loss of part of a well-loved field path, but the East Sussex County Council think the "alternative route" should satisfy them and are seeking permission to close the path. A local petition against the scheme is being prepared but the closing date is December 24.

Field path walks have always been one of the pleasures of country life and in these days of heavy traffic it seems a pity to deny walkers access to any route that will keep them off the roads and thus, undoubtedly, help drivers to avoid accidents.

Views of a Road Accident Panel

AMEETING of an "accident panel " of which the members included Chief Supt. H. Palmer, of the traffic side of Birmingham City Police, Lt.-Col. Vernon C. Brook, 0.B.E., an early organizer of a safety committee in the city, and Ch.. J. D. Beard, M.B.E., was recently arranged by the Midland centre of the Institute of Road Transport Engineers. The president gave a talk on road accidents and their prevention,and then the chairman, Mr. F. C. De Paeztron invited questions for the panel.

One general view was that winking indicators are not altogether satisfactory. The original pattern cannot be seen by the driver of a vehicle alongside another, so that he has no indication of the intentions of the driver of this, whilst in a close-up line of traffic,both sets may be obscured. They are, however, preferred from the maintenance aspect.

There was complaint of the excessive brilliance of some rear lamps, but the view taken was that it was better to have these than insufficient light. It was, however, a case of going from the sublime to the ridiculous.

Another point raised concerned road signs, which for modern conditions were claimed to be often too small and not well sited.

A plea for a rule giving priority to traffic coming from the right was not supported, although the police in most cases advise this at roundabouts, except in specially heavy traffic conditions. No support was accorded to any upper limit of speed outside built-up areas. Reference was made to the failure of the hydraulic brakes on two new vehicles.

A Bus Conductor's Griela we

VIANY things, not always polite, are said about the "I courtesy and general behaviour of certain conductors oC buses. On the other hand, passengers do frequently write to the operating companies or boards expressing appreciation of particularly nice gestures made by the men Or women engaged in this class of work. There is no doubt that it can sortie,times be a trying occupation which involves self-control iE sharp repartee is to be avoided.

During the Christmas season, with its surging crowds and traffic delays, the spirit of the time seems to evaporate when people have to wait long periods for buses. A conductor is then apt to feel sore if he, or she, is the recipient of the rough edge of the tongue of a delayed citizen when the incident is probably entirely out qf control.

Not all conductors can thus be exonerated, but a little more give and take would ease-the position.