What the Motor Industry Needs in Standards 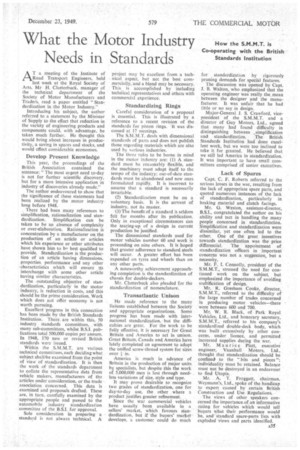 Page 53, 23rd December 1949 — What the Motor Industry Needs in Standards
Close
Noticed an error?
If you've noticed an error in this article please click here to report it so we can fix it.

AT a meeting of the Institute of Road Transport Engineers, held last week at the Royal Society of Arts, Mr H. Clutterbuck. manager of the technical department of the Society of Motor Manufacturers and Traders, read a paper entitled "Standardization in .the Motor Industry."

Introducing his subject, the author referred to a statement by the Minister of Supply to the effect that reduction in the variety of engineering products and components could, with advantage, be taken much further. He thought this would bring about increases in productivity, a saving in spares and stocks, and would effect considerable economies.

This year, the proceedings of the British Association contained the sentence: "The most urgent need to-day is not for further scientific discovery, but for a more intensive application in industry of discoveries already made."

The author endeavoured to show that the significance of these statements had been realized by the motor industry long before 1948.

There had been many references to simplification, rationalization and standardization. Simplification can be taken to be an absence of complexity or over-elaboration. Rationalization is concentration by a manufacturer on the production of an article or articles which his experience or other attributes have shown him to be best qualified to provide. Standardization is the production of an article having dimensions, properties, performance and any other -characteristics which will ensure Its interchange with some other article having similar characteristics.

The outstanding objective of standardization, particularly in the motor industry, is reduction in costs, and this should be the prime consideration. Work which does not offer economy is not worth pursuing.

Excellent progress in this connection has been made by the British Standards Institution. There. are within this, 50 industry standards committees, with many sub-committees, whilst B.S.!. publications total 500,000 copies per annum. In 1948, 170 new or revised British standards were issued.

Within the S.M.M.T. are various technical committees, each deciding what subject shallibe examined from the point of view of standardization. It is then the work of the standards department to collate the representative data from vehicle makers, manufacturers of the articles under consideration, or the trade association concerned. This data is examined and proposals drafted. These are, in turn, carefully examined by the appropriate people and passed to the automobile industry standardization committee of the B.S.I. for approval.

Sole consideration in preparing a standard is not always technical. A project may be excellent from a technical aspect, but not the best commercially, and a blend may be necessary. This is accomplished by including technical representatives and others with commercial experience.

Careful consideration of a proposal is essential. This is illustrated by a reference to a recent revision of the standards for piston rings. it was discussed at 17 meetings.

The S.M.M.T. .deals with dimensional standards of parts and does not publish those regarding materials which are alto used by various industries.

The three rules to be borne in mind in the motor industry are: (I) A standard must be reasonably flexible, and the machinery must adapt itself to the tempo of the industry; out-of-date standards must be abandoned and new ones formulated rapidly. It is incorrect to assume that a standard is necessarily invariable.

(2) Standardization must be on a voluntary basis. It is the servant of industry, not its master.

(3) The benefit of a standard is seldom felt for months after its publication. Only in exceptional circumstances can the tearing-up of a design in current production be justified.

The dimensional standards used for motor vehicles number 60 and work is proceeding on nine others. It is hoped that greater adherence to standard steels will occur. A greater effort has been expended on tyres and wheels than on any other parts.

A noteworthy achievement approaching completion is the standardization of chassis for double-deckers.

Mr. Clutterbuck also pleaded for the standardization of nomenclature.

He made reference to the many liaisons established between the Society and appropriate organizations. Some progress has been made with international standardization, • but the difficulties are great. For the work to be fully effective, it is necessary for Great Britain and America to act in unison. Great Britain. Canada and America have lately completed an agreement to adopt the unified screw-thread system for sizes over in.

America is much in advance of Britain in the production of major units by specialists, but despite this the work of 5,000,000 men is lost through needless variations of size, style and type.

It may prove desirable to recognize two grades of standardization, one for day-to-day use, the other where a product justifies greater refinement.

Since the war commercial vehicles have usually been available in a sellers' market, which favours standardization, but if the buyers' market' develops, a customer could do much

for standardization by rigorously pruning demands for special features.

The discussion was opened by Capt. J. B. Walton, who emphasized that the operating engineer was really the mean between the designer and the manufacturer. It was unfair that he had little or no say in design.

Major-General J. S. Crawford, vicepresident of the S.M,M.T. and a director of Guy Motors, Ltd., agreed that many had found difficulty in distinguishing between ,simplification and standardization. The British Standards Institution had done excellent work, but we were too inclined to take it for granted. He believed that we still led America in standardization. It was important to have small committees comprised of senior executives.

Capt. C. F. Roberts referred to the serious losses in the war, resulting from the lack of appropriate spare parts, and quoted numerous instances of the lack of standardization, particularly in braking material and clutch facings.

Mr. G. Weston, assistant-director, B.S.I., congratulated the author on his ability and tact in handling the many people concerned in standardization. Simplification and standardization were dissimilar, yet one often led to the other. One of the great incentives towards standardization was the price differential. The appointment of standardization officers in important concerns was not a suggestion, but a necessity.

Mr. F. I. Connolly, president of the S.M.M.T., stressed the need for continued work on the subject, but emphasized the importance of avoiding stultification of design.

Mr. R. Gresham Cooke, director, S.M.M.T., referred to the difficulty or the large number of trades concerned in producing motor vehicles—there were between 600 and 700.

Mr. W. R. Black, of Park Royal Vehicles, Ltd., and honorary secretary, S.M.M.T.. referred to his company's standardized double-deck body, which was built extensively by other concerns, under licence, and permitted increased supplies during the war.

Mr. Maurice Platt, executive engineer, Vauxhall Motors, Ltd., thought that standardization should be confined to the "bits and pieces "; individuality must be retained. Balance must not be destroyed in an endeavour to find Utopia.

Mr. A. T. Froggatt. chairman, Weymann's, Ltd., spoke of the handicap to export caused by certain British Construction and Use Regulations.

The views of other speakers concerned the importance of an informative rating for vehicles which would tell 'buyers what their performance would be, and standard spare-parts lists with exploded views and parts identified.