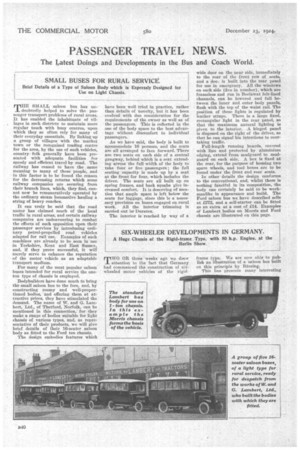 Page 24, 23rd December 1924 — PASSENGER TRAVEL NEWS.
Close
Noticed an error?
If you've noticed an error in this article please click here to report it so we can fix it.

Brief Details of a Type of Saloon Body which is Expressly Designed for Use on Light Chassis.

T"SMALL saloon bus has undoubtedly helped to solve the passenger transport problems of rural areas. It has enabled the inhabitants of villages in such districts to maintain more regular touch with busy centres, upon which they so often rely for many of their everyday essentials. By linking up a group of villages with the market town or the recognized trading centre for the area, by the use of such vehicles, country folk generally have been presented with adequate facilities for speedy and efficient travel by road. The railway has ceased to have the same meaning to many of these people, and in this factor is to be found the reason for the decreasing returns which some railway companies are securing from their branch lines, which, they find, cannot now be remuneratively operated by the ordinary steam locomotive hauling a string of heavy coaches.

It can truly be said that the road motor has claimed much of the local traffic in rural areas, and certain railway companies are endeavouring to combat the effects of such opposition upon their passenger services by introducing ordinary petrol-propelled road vehicles adapted for rail use. Examples of such machines are already to be seen in use in Yorkshire, Kent and East Sussex, and, if they prove successful, it will merely serve to enhance the reputation of the motor vehicle as an adaptable transport medium.

For many of the most popular saloonbuses intended for rural service the oneton type of chassis is employed.

Bodybuilders have done much to bring the small saloon bus to the fore, and, by constructing roomy and well-proportioned bodies, and offering them at attractive prices, they have stimulated the demand. The name of W. and G. Lambert, Ltd., of Thetford, Norfolk, can be mentioned in this connection, for they make a range of bodies suitable for light chassis of various types, and, as representative of their products, we will give brief details of their 16-seater saloon body as fitted to the Ford ton chassis.

The design embodies features which have been well tried in practice, rather than details of novelty, but it has been evolved with due consideration for the requirements of the owner as well as of the passengers. This is reflected in the use of the body space to the best advantage without discomfort to individual passengers.

As we have said, the body is built to ageommodate 16 persons, and the seats are all arranged to face forward. There are two seats on each side of a central gangway, behind which is a seat extending across the full width of the body to take four or five passengers ; the full seating capacity is made •up by a seat -at the front for four, which includes the driver. The seats are all built up on spring frames, and back Squabs give increased comfort. It is deserving of mention that ample space is left below the seats for luggage, since this is a necessary provision on buses engaged on rural work. All the interior trimming is carried out in' Duratex.

The interior is reached by way of a

wide door on the near side, immediately to the rear of the front row of seats, and a doo,is built into the rear panel for use in emergency. All the windows on each side (five in number), which are frameless and run in Beclawat felt-lined channels, can be lowered and fall between the inner and outer body panels, flush with the top of the waist rail. The position of these lights is regulated by leather straps. There is a large fixed, rectangular light in the rear panel, so that the maximum natural lighting is given to the interior. A hinged panel is disposed on the right of the driver, so that he can signal his intentions to overtaking traffic.

Full-length running boards, covered with lino and protected by aluminium edging, extend from mudguard to mudguard on each side. A box is fixed at the rear, for the purpose of housing two spare wheels, and tool boxes are to be found under the front and rear seats.

In other details the design conforms to the conventional, and, whilst 'there is nothing fanciful in its composition, the body can certainly be said to be workmanlike in appearance and build. The Ford saloon bus we have described sells at £272, and a self-starter can be fitted as an extra at a cost of £14. Examples of Lambert bodies on Morris and Ford chassis arc illustrated on this page.