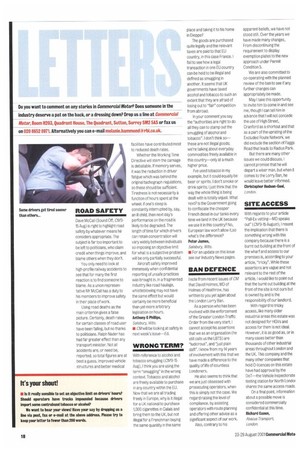 With reference to alcohol and tobacco smuggling (CM9-15 Aug), I think you are using the term "smuggling" in the wrong context. Tobacco and alcohol are freely available to purchase in any country within the EU. Now that we are all trading freely in Europe, why is it illegal for a UK national to purchase 1,000 cigarettes in Calais and bring them to the UK, but not illegal for a Frenchman buying the same quantity in the same

place and taking it to his home in Dieppe?

The goods are purchased quite legally and the relevant taxes are paid to that EU country, in this case France. I fail to see how a legal transaction in one EU country can be held to be illegal and defined as smuggling in another. It seems that UK governments have taxed alcohol and tobacco to such an extent that they are afraid of losing out to "fair" competition from abroad.

In your comment you say the "authorities are right to do all they can to stamp out the smuggling of alcohol and tobacco". I don't think so— these are not illegal goods; we're talking about everyday commodities freely available in this country—only at a much higher price.

I've used tobacco in my example, but it could equally be beer or spirits. I don't smoke or drink spirits; I just think that the way the whole thing is being dealt with is totally unjust. What next? Is the Government going to confiscate the cheaper French diesel in our tanks every time we land in the UK because we use it in this country? No, European law won't allow it,so what's the difference?

• For an update on this issue see our Industry News pages.