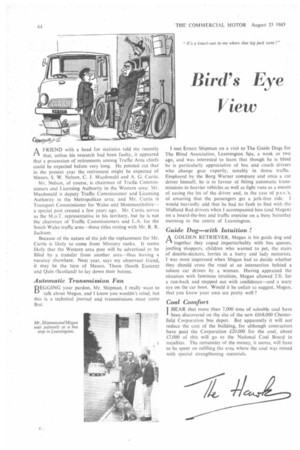 A FRIEND with a head for statistics told me recently

that, unless his research had been faulty, it appeared that a procession of retirements among Traffic Area chiefs could be expected before very long. He pointed out that in the present year the retirement might be expected of Messrs. S. W. Nelson, C. J. Macdonald and A. G. Curtis.

Because of the nature of the job the replacement for Mr. Curtis is likely to come from Ministry ranks. It seems likely that the Western area post will be advertised or be filled by a transfer from another area—thus leaving a vacancy elsewhere. Next year, says my observant friend, it may be the turn of Messrs. Thom (South Eastern) and Quin (Scotland) to lay down their batons.

BEGGING your pardon, Mr, Shipman. I really want to talk about Megan. and I know you wouldn't mind, but this is a technical journal and transmissions must come first.

I met Ernest Shipman on a visit to The Guide Dogs for The Blind Association, Leamington Spa, a week or two ago, and was interested to learn that though he is blind he is particularly appreciative of bus and coach drivers who change gear expertly, notably in dense traffic. Employed by the Borg Warner company and once a car driver himself, he is in favour of fitting automatic transmissions in heavier vehicles as well as light vans as a means of easing the lot of the driver and, in the case of p.s.v.'s, of ensuring that the passengers get a jerk-free ride. would hurriedly add that he had no fault to find with the Midland Red drivers when I accompanied him (and Megan) on a board-the-bus and traffic exercise on a busy Saturday morning in the centre of Leamington.

A GOLDEN RETRIEVER, Megan is his guide dog and " together they coped imperturbably with bus queues, jostling shoppers, children who wanted to pet, the stairs of double-deckers, lorries in a hurry and lady motorists. I was most impressed when Megan had to decide whether they should cross the road at an intersection behind a saloon car driven by a woman. Having appraised the situation with feminine intuition, Megan allowed 2 ft. for a run-back and stepped out with confidence—and a wary eye on the car boot. Would it be unfair to suggest, Megan, that you know your own sex pretty well ?

I HEAR that more than 7,000 tons of saleable coal have I been discovered on the site of the new £668,000 Chesterfield Corporation bus depot. But apparently it will not reduce the cost of the building, for although contractors have paid the Corporation £20,000 for the coal, about £7,000 of this will go to the National Coal Board in royalties. The remainder of the money, it seems, will have to be spent on refilling the area where the coal was mined with special strengthening materials.