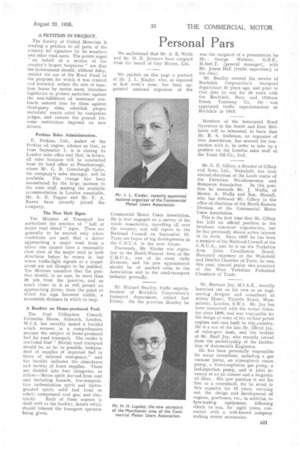 Page 31, 23rd August 1935 — Personal Pars
Close
Noticed an error?
If you've noticed an error in this article please click here to report it so we can fix it.
Keywords : Business / Finance

We understand that Mr. A. E. Webb and Mr. H, E. Johnson have resigned from the board of Guy Motors, Ltd.

We publish on this page a portrait of Mr. J. L. Kinder, who, as reported in last week's issue, has been appointed national organizer of the

Commercial Motor Users Association. He is now engaged on a survey of the whole Association, travelling all over the country, and will report to the National Council on September 10. There are hopes of big developments in the C.M.U.A. in the near future.

Previously, Mr. Kinder was organizer to the North-Western Area of the C.M.U.A., one of its , most virile divisions, and his new appointment should be of marked' value to the Association and to the road-transport industry generally.

Mr. Bentley entered the service of Rochdale Corporation's transport department 31 years ago, and prior to that date he was for 10 years with the Rochdale, Bury and Oldham Steam Tramway Co. He • was appointed traffic superintendent at Rochdale in 1913.

Members of the Associated Road Operators in the South and East Midlands will be interested to learn that Mr. R. S. Anderson, an organizer of that Association, has severed his connection with it, in order to take up a position on the London sales staff of *the Texas Oil Co., Ltd.

Mr. G. E. Gilbey, a director of Gilbey and Sons, Ltd., Wakefield, has been elected chairman of the Leeds centre of the Furniture Warehousemen and Removers Association. In this position he succeeds Mr. J. Wallis, of Messrs. A. Wallis and Son, Birstall, who has followed Mr. Gilbey in the office of chairman of the North-Eastern Division of the Commercial Motor Users Association.

This is the first time that Mr. Gilbey has held an official position in the furniture removers' organization, but he has previously shown active interest in its work. Since 1927 he has been a member of the National Council of the C.M.U.A., and he is on the Yorkshire Area Joint Conciliation Board. Honorary secretary of the Wakefield and District Chamber of Trade, he was, this year, elected junior vice-president of the West Yorkshire Federated Chambers of Trade.

Mr. Bertram Joy, M.I.A.E., recently launched out on his own as an engineering designer and consultant at Abbey House, Victoria Street, Westminster, London, S.W.]. Mr. Joy has been connected with the motor industry since 1846, and was responsible for the design of some of the earliest petrol engines and cars built in this,country. He is a son of the late Mr. David joy, of valve-gear fanie, and the brother of Mr. Basil Joy, who recently retired from the secretaryship of the Institution of Automobile Engineers.

He has been personally responsible for many inventions, including a gas vacuum pump, an atmospheric steam pump, a direct-explosion gas pump, a fuel-injection pump, and is joint inventor of an air cleaner and a magnetic oil filter. His new position is not his first as a consultant, for he acted in this capacity for 12 years, carrying out the design and development of engines, gearboxes, etc., in addition to tyre-testing equipment, following which he was, for eight years, connected with a well-known company making motor accessories.