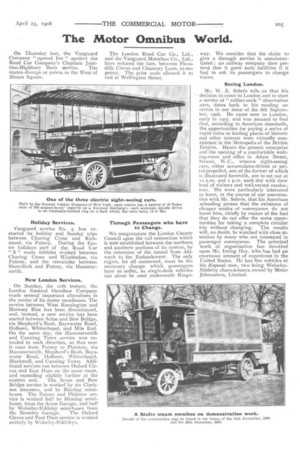 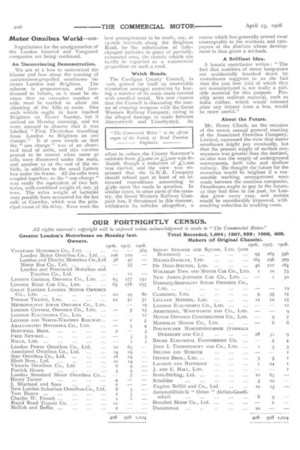 Page 7, 23rd April 1908 — The Motor Omnibus World.
Close
Noticed an error?
If you've noticed an error in this article please click here to report it so we can fix it.
Keywords : London General Omnibus Company, Putney, Hammersmith

On Thursday. Last, the Vanguard Company " opened fire " against the Road Car Company's Clapham Junetion-Highbury Barn service. The routes diverge at points to the West of Sloane Square.

On Sunday, the 12th instant, the London General Omnibus Company made several important alterations in the routes of its motor omnibuses. The service between West Kensington and Hornsey Rise has been discontinued, and, instead, a new service has been started between Acton and Bow Bridge, via Shepherd's Bush, Bayswater Road, Holborn, Whitechapel, and Mile End. On the same day, the Hammersmith and Canning Town service was extended in each direction, so that now it runs from Putney to Plaistow, via Hammersmith, Shepherd's Bush, Bayswater Road, Holborn, Whitechapel, Blackwall, and Canning Town. Additional services run between Oxford Circus and East Ham on the same route, and extending slightly further at the eastern end. The Acton and Bow Bridge service is worked by six Clarkson steamers, and by Bussing omnibuses. The Putney and Plaistow service is worked half by Bussing omnibuses, from the Acton Garage, and half by Wolseley-Siddeley omnibuses from the Bromley Garage. The Oxford Circus and East Ham service is worked entirely by Wolseley-Siddeleys. The London Road Car Co., Ltd., and the Vanguard Motorbus Co., Ltd., have reduced the fare, between Piccadilly Circus and Chancery Lane, to one penny. The prior scale allowed it to end at Wellington Street.

Through Passengers who have to Change.

We congratulate the London County Council upon the rail connection which is now established between the northern and southern portions of its System', by the extension of the tunnel from Aldwych to the Embankment. The only regret, for all concerned, roust be the necessary change which passengers have to suffer, as single-deck vehicles can alone be used underneath Kings

way. We consider that the claim to give a through service is unsubstantiated: no railway company dare pretend that it gave such facilities if it had to ask its passengers to change trains.

Mr. W. E. Sebree tells us that his decision to come to London and to start a service of" rubber-neck "observation cars, dates back to his reading an article in our issue of the 6th September, 1906. He came over to London, early in 1907, and was amazed to find that, according to American standards, the opportunities for paying a series of rapid visits to leading places of historic and other interest were virtually nonexistent in the Metropolis of the British Empire. Hence the present enterprise and the opening of a comfortable waiting-room and office in Adam Street, Strand, W.C., whence sight-seeing cars, either accumulator-driven or petrol-propelled, one of the former of which is illustrated herewith, are to set out at so a.m. and 2 p.m. each day with their load of visitors and well-versed conductors. We were particularly interested to learn, in the course of our conversation with Mr. Sebree, that his American schooling proves that the existence of cheaper modes of -conveyance do not harm him, chiefly by reason of the fact that they do not offer the same opportunities for taking a complete circular trip without changing. The results will, no doubt, be watched with close attention by many who are interested in passenger conveyance. The principal work of organisation has devolved upon Mr. Irving Hey, who has had an enormous amount of experience in the United States. He has five vehicles at his disposal now, two being WolseleySiddeley cbars-a-banes owned by Motor jobrnasters, Limited.

Negotiations for the amalgamation of the London General and Vanguard companies are being continued.

We are at a loss to understand the bluster and fuss about the running of accumulator-propelled omnibuses between London and Brighton. The scheme is preposterous, and foredoomed to failure, as it must be obvious that an excessive number of cells must be carried to allow the climbing of the hills en route. One such vehicle ought to have reached Brighton on Easter Sunday, but it arrived on Monday morning, and we were amused to observe that it was labelled " First Electrobus travelling from London to Brighton on one charge." It at once struck us that the " one charge " was of an abnormal total of units, and this surmise proved to be correct when some 32 cells were discovered under the seats, and another 12 at the end of the vehicle, in addition to the usual battery box under the frame. All the cells were coupled together, so the "one charge " was really the equivalent of two batteries, with combined weight of, say, 31 tons. The extra weight of batteries may possibly have accounted for the hot axle at Crawley, which was the principal cause of the delay. Even were the

best arrangements to be made, say, at 15-mile intervals along the Brighton Road, for the substitution of fullycharged batteries in place of partiallyexhausted ones, the electric vehicle can hardly be regarded as a commercial Proposition on such a road.

The Cardigan County Council, in 906, gained for itself an unenviable reputation amongst motorists by leaving a number of its main roads covered with unrolled metal. We now ebserve that the Council is discussing the matter of crossing weapons with the Great Western Railway Company, owing to the alleged damage to roads between Aberystwyth and Llanrhystyd. An effort to reduce the County Surveyor's estimate from ,4",:5,000 to ,4;3,000 was defeated, though a reduction of ,t,000 was carried, and the view was expressed that the G.W.R. Company should refund part at least of an increased expenditure amounting to ,..„480 upon the roads in question. In similar cases, in other parts of the country, the Great Western Railway Company has, if threatened in this manner, withdrawn its vehicles altogether, a course which has generally proved most unacceptable to the residents and ratepayers of the districts whose development is thus given a set-back.

A lunatic contributor writes : " The fact that numbers of street lamp-posts are accidentally knocked down by motorbuses suggests to us the fact that the cast iron (sic) of which they are manufactured is not really a suitable material for this purpose. Possibly some resilient material, such as india rubber, which would rebound after any impact from a bus, would be more useful."

Mr. Henry Clinch, on the occasion of the recent annual general meeting of the Associated Omnibus Company, Limited, expressed the view that motor omnibuses might pay eventually, but that the present supply of surface conveyances was greater than the demand, as also was the supply of underground conveyances, both tube and shallow railway. He thought the future for the motorbus would be brighter if a reasonable working arrangement were made between the omnibus companies. Omnibuses ought to pay in the future, as they had done in the past, for London grew every year, and motors would be considerably improved, with resulting reduction in working costs.