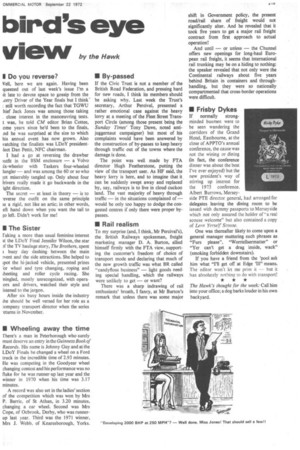 I Do you reverse?

Yell, here we are again. Having been queezed out of last week's issue I'm a it late to devote space to gossip from the .orry Driver of the Year finals but I think : still worth recording the fact that TGWU hief Jack Jones was among those taking

close interest in the manoeuvring tests. t was, he told CM editor Brian Cottee, ome years since he'd been to the finals, .nd he was surprised at the size to which his annual event has now grown. Also vatching the finalists was LDoY presidentlect Dan Pettit, NFC chairman.

I had a go at reversing the drawbar intfit in the BSM enclosure — a Volvo ix-wheeler with Taskers four-wheeled 'angler — and was among the 60 or so who ;ot miserably tangled up. Only about four !rivers really made it go backwards in the ight direction.

The secret — at least in theory — is to everse the outfit on the same principle is a rigid, not like an artic; in other words, eft hand down when you want the tail to ;o left. Didn't work for me!

Faking a more than usual feminine interest it the LDoY Final Jennifer Wilson, the star )1the TV haulage story, The Brothers, spent i busy day dashing between the main :vent and the side attractions. She helped to ;pot the hi-jacked vehicle, presented prizes -or wheel and tyre changing, roping and ;heeting and roller cycle racing. She ningled, mostly unrecognized, with opera.ors and drivers, watched their style and istened to the jargon.

After six busy hours inside the industry he should be well versed for her role as a mmpany transport director when the series .eturns in November.

• Wheeling away the time

There's a man in Peterborough who surely must deserve an entry in the Guinness Book of Records. His name is Johnny Guy and at the LDoY Finals he changed a wheel on a Ford truck in the incredible time of 2.93 minutes. He was competing in the Goodyear wheel changing contest and his performance was no fluke for he was runner-up last year and the winner in 1970 when his time was 3.17 minutes.

A record was also set in the ladies' section of the competition which was won by Mrs P. Barrie, of St Athan, in 3.20 minutes, changing a car wheel. Second was Mrs Cope, of Ocbrook, Derby, who was runnerup last year. Third was the 1971 winner, Mrs J. Webb, of Knaresborough, Yorks.

If the Civic Trust is not a member of the British Road Federation, and pressing hard for new roads, I think its members should be asking why. Last week the Trust's secretary, Arthur Percival, presented a rather emotional case against the heavy lorry at a meeting of the Fleet Street Transport Circle (among those present being the Sunday Times' Tony Dawe, noted antijuggernaut campaigner) but most of his complaints would have been answered by the construction of by-passes to keep heavy through traffic out of the towns where the damage is done.

The point was well made by FTA director Hugh Featherstone, putting the view of the transport user. As HF said, the heavy lorry is here, and to imagine that it can be suddenly swept away and replaced by, say, railways is to live in cloud cuckoo land. The vast majority of heavy through traffic — in the situations complained of— would be only too happy to dodge the congested centres if only there were proper bypasses.

To my surprise (and, I think, Mr Percival's), the. British Railways spokesman, freight marketing manager D. A. Burton, allied himself firmly with the FTA view, supporting the customer's freedom of choice of transport mode and declaring that much of the new growth traffic was what BR called "candyfloss business" — light goods needing special handling, which the railways were unlikely to get — or want?

There was a sharp indrawing of rail enthusiasts' breath, I fancy, at Mr Burton's remark that unless there was some major shift in Government policy, the present road/rail share of freight would not significantly alter. And he revealed that it took five years to get a major rail freight contract from first approach to actual operation!

And until — or unless — the Chunnel offers new openings for long-haul European rail freight, it seems that international rail trunking may be on a hiding to nothing: the speaker revealed that not only were the Continental railways about five years behind Britain in containers and throughhandling, but they were so nationally compartmented that cross-border operations were difficult.

If normally strongminded busmen were to be seen wandering the corridors of the Grand Hotel, Eastbourne, at the close of APPTO's annual conference, the cause was not the wining or dining (in fact, the conference dinner was about the best I've ever enjoyed) but the new president's way of stirring up interest for the 1973 conference. Albert Burrows, Merseyside PTE director general, had arranged for delegates leaving the dining room to be issued with dummy passports to Merseyside which not only assured the holder of -a real scouse welcome" but also contained a copy of Lern Yerself Scouse.

One was thereafter likely to come upon a general manager muttering such phrases as "Furs please", "Worriellsermatter" or "Yer can't get a drag inside, wack" (smoking forbidden downstairs).

If you have a friend from the 'pool ask him what "I'll get off at Edge 'Ill" means.

The editor won't let me print it hut it has absolutely nothing to do with transport! * * *

The Hawk's thought for the week: Call him into your office; a dog barks louder in his own backyard.