Law enforcement and the attitude adopted by VOSA has grabbed Rikki Chequer's eye this week. 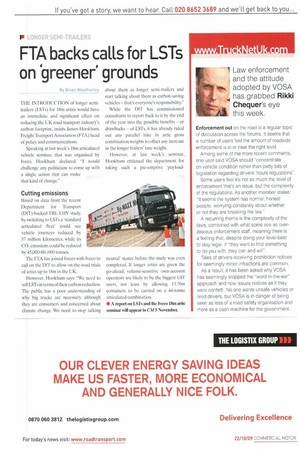 Page 13, 22nd October 2009 — Law enforcement and the attitude adopted by VOSA has grabbed Rikki Chequer's eye this week.
Close
Noticed an error?
If you've noticed an error in this article please click here to report it so we can fix it.
Keywords : Vehicle And Operator Services Agency, Road Traffic Safety

Enforcement out on the road is a regular topic of discussion across the forums. It seems that a number of users feel the amount of roadside enforcement is at or near the right level.

Among some of the more recent comments, one user said VOSA should "concentrate on vehicle condition rather than petty bits of legislation regarding drivers' hours regulations".

Some users feel it's not so much the level of enforcement that's an issue, but the complexity of the regulations. As another member states: "It seems the system has normal, honest people, worrying constantly about whether or not they are breaking the law."

A recurring theme is the complexity of the laws, combined with what some see as overzealous enforcement staff, meaning there is a feeling that, despite doing your level-best to stay legal, if "they want to find something to do you with, they can and will".

As a result, it has been asked why VOSA has seemingly stopped the 'word-in-the-ear" approach and now issues notices as if they were confetti. No one wants unsafe vehicles or tired drivers, but VOSA is in danger of being seen as less of a road safety organisation and more as a cash machine for the government.