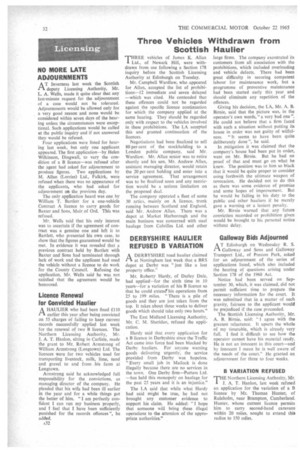 Page 34, 22nd October 1965 — DERBYSHIRE HAULIER REFUSED B VARIATION
Close
Noticed an error?
If you've noticed an error in this article please click here to report it so we can fix it.
Keywords : Derbyshire, Derby, Thomas Hardy

A DERBYSHIRE road haulier claimed 1—k at Nottingham last week that a BRS depot at Derby was "just like a lost property office."

Mr. Roberty Hardy, of Darley Dale, had applied—for the sixth time in 10 years—for a variation of his B licence so that he could extend' his operations from 25 to 199 miles. "There is a pile of goods and they are just taken from the top. It takes about three weeks to deliver goods which should take only two hours."

Hardy said that every application for a B licence in Derbyshire since the Traffic Act came into force had been blocked by Derby hauliers. For anyone wanting goods delivering urgently, the service provided from Derby was hopeless, "Every small job in Matlock is done illegally because there are no services in the town. One Derby firm—Porters Ltd. —has held this monopoly on haulage for the past 25 years and it is an injustice."

The LA said that while what Hardy had said might be true, he had not brought any customer evidence to support his claim. He added: "I hope that someone will bring these illegal operations to the attention of the appropriate authorities."

T Edinburgh on Wednesday R. S. Galloway and Sons and Galloway Transport Ltd., of Preston Park, asked for an adjournment of the series of applications listed, which also included the hearing of questions arising under Section 178 of the 1960 Act.

Notice had been served on September 30, which, it was claimed, did not permit sufficient time to prepare the necessary information for the court. It was submitted that in a matter of such gravity, fairness to the applicant would be prejudiced if the case proceeded.

The Scottish Licensing Authority, Mr. A. B. Birnie, said: " I agree with the greatest reluctance. It upsets the whole of my timetable, e;hich is already very full. I find it difficult to see how the operator cannot have his material ready. He is not an innocent in this court—and by innocent I mean he is well aware of the needs of the court." He granted an adjournment for three to four weeks.

B VARIATION REFUSED THE Northern Licensing Authority, Mr. J. A. T. Hanlon, last week refused an application for the variation of a B licence by Mr. Thomas Hunter, of Ruleholm, near Brampton, Cumberland. Hunter, whose current licence permits him to carry second-hand caravans within 20 miles, sought to extend this radius to 150 miles.