"Trespassing" If Bus is Full ? 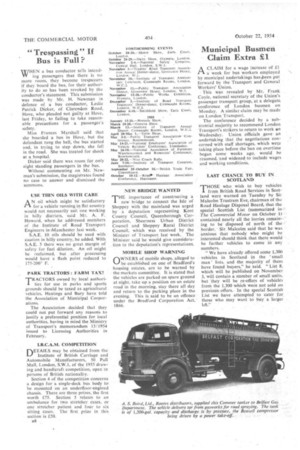 Page 42, 22nd October 1954 — "Trespassing" If Bus is Full ?
Close
Noticed an error?
If you've noticed an error in this article please click here to report it so we can fix it.
Keywords : Swale, Bus, Isle Of Sheppey, Sheerness, Queenborough, Hove

NVHEN a bus conductor tells intending passengers that there is no more room, they become trespassers if they board the bus, for their authority to do so has been revoked by the conductor's statement. This submission was made by Mr. H. Newman in defence of a bus conductor, Leslie Patrick Dicker, of Clarendon Road, Hove, who pleaded not guilty at Hove, last Friday, to failing to take reasonable precautions for a passenger's safety.

Miss Frances Marshall said that she boarded a bus in Hove, but the defendant rang the bell, the bus started and, in trying to step down, she fell in the road. She was treated for shock at a hospital.

Dicker said there was room for only eight standing passengers in the bus.

Without commenting on Mr. Newman's submission, the magistrates found no case to answer and dismissed the summons.

USE THIN OILS WITH CARE

AN oil which might be satisfactory for a vehicle running in flat country would not necessarily suit one working in hilly districts, said Mr. A. F. Howard. when he addressed members of the Institute of Road Transport Engineers in =Manchester last week.

S.A.E. 10 oils should be used with caution in hilly country, he added. With S.A.E. 5 there was no great margin of safety for fuel dilution. An oil might be reclaimed, but after processing would have a flash point reduced 10 175-200° F.

TTRACTORS owned by local authorities for use in parks and sports grounds should be taxed as agricultural vehicles, Hastings and Bury have told the Association of Municipal Corporations.

The Association . decided that they could not put forward any reasons to justify a preferential position for local authorities, having in mind the Ministry of Transport's memorandum 13/1954 issued to Licensing Authorities in February.

DETAILS may be obtained from the Institute of British Carriage and Automobile Manufacturers, 50 Pall Mall, London, S.W.!, of the 1955 drawing and handicraft competition, open to persons of British nationality.

Section 4 of the competition concerns a design for a single-deck bus body to be mounted on an undertloor-engined chassis. There are three prizes, the first worth £75. Section 5 relates to an ambulance for two stretcher cases, or one stretcher patient and four to six sitting cases. The first prize in this section is £50.

THE importance of constructing a

new bridge to connect the Isle of Sheppey with the mainland was urged by a deputation representing Kent County Council. Queenborough Corporation, Sheerness Urban District Council and Sheppey Rural District Council. which was received by the Minister of Transport last week. The Minister said he would give consideration to the deputation's representations.

OWNERS of mobile shops, alleged to be established on one of Bradford's housing estates, are to be warned by the markets committee. It is stated that the vehicles are parked on spare ground at night, take up a position on an estate road in the morning, stay there all day and return to the parking place in the evening. This is said to be an offence under the Bradford Corporation Act, 1866.