The Future of the Show 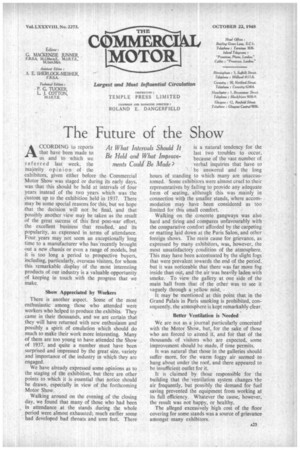 Page 25, 22nd October 1948 — The Future of the Show
Close
Noticed an error?
If you've noticed an error in this article please click here to report it so we can fix it.

CCORDING to reports that have been made to us and to which we referred last week, the majority opinion of the exhibitors, given either before the Commercial Motor Show was staged or during its early days, was that this should be held at intervals of four years instead of the two years which was the custom up to the exhibition held in 1937. There may be some special reasons for this, but we hope that the decision will not be final, and that possibly another view may be taken as the result of the great success of this first post-war effort, the excellent business that resulted, and its popularity, as expressed in terms of attendance. Four years may not seem an exceptionally long time to a manufacturer who has"recently brought out a new chassis or even a range of models, but it is too long a period to prospective buyers, including, particularly, overseas visitors, for whom this remarkable display of the most interesting products of our industry is a valuable opportunity of keeping in• touch with the progress that we make.

• Show Appreciated by Workers • There is another aspect. Some of the most enthusiastic among those who attended were workers who helped to produce the exhibits. They came in their thousands, and we are certain that they will have returned with new enthusiasm and possibly a spirit of emulation which should do much to make their work more interesting. Many of them are too young to have attended the Show of 1937, and quite a number must have been surprised and impressed by the great size, variety and importance of the industry in which they are engaged.

We have already expressed some opinions as to the staging of the exhibition, but there are other points to which it is essential that notice should be drawn, especially in view of the forthcoming Motor Show.

Walking around on the evening of the closing day, we found that many of those who had been in attendance at the stands during the whole period were almost exhausted', much earlier some had developed bad throats and sore feet. There At What Intervals Should It is a natural tendency for the last two troubles to occur, Be Held and What Improve. because of the vast number of ments Could Be Made? verbal inquiries that have to ' • be answered and the long hours of standing to which many are unaccustomed. Some exhibitors were almost cruel to their representatives by failing to provide any adequate form of seating, although this was mainly in connection with the smaller stands, where accommodation may have been considered as too limited for this small comfort.

Walking on the concrete gangways was also hard and tiring and compares unfavourably with the comparative comfort afforded by the carpeting or matting laid down at the Paris Salon, and other foreign shows. The main cause for grievance, as expressed by many exhibitors, was, however, the most unsatisfactory condition of the atmosphere. This may have been accentuated by the slight fogs that were prevalent towards the end of the period, but it was noticeable that there was far more fog inside than out, and the air was heavily laden with smoke, To View the gallery at one side of the main hall from that of the other was to see it vaguely through a yellow mist.

It may be mentioned at this point that in the Grand Palais in Paris smoking is prohibited, consequently, the atmosphere is kept remarkably clear.

Better Ventilation is Needed We are not as a journal particularly conceined with the Motor Show, but, for the sake of those who are forced to attend it, and for that of the thousands of visitors who are expected, some improvement should be made, if time permits.

It was natural that those in the galleries should suffer more, for the warm foggy air seemed to hang about under the roof, and there appeared to be insufficient outlet for it.

It is claimed by those responsible for the building that the ventilation system changes 'the air frequently, but possibly the demand for fuel saving prevented the equipment from working at its full efficiency. Whatever the cause, however, the result was not happy, or healthy.

The alleged excessively high cost of the floor covering for some stands was a source of grievance amongst many exhibitors.