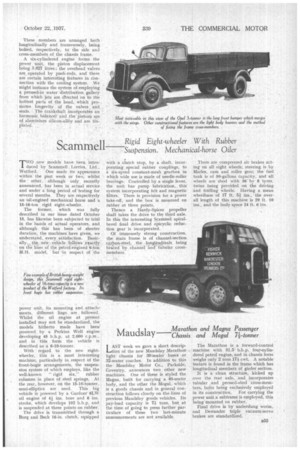 Page 77, 22nd October 1937 — Rigid Eight-wheeler With Rubber
Close
Noticed an error?
If you've noticed an error in this article please click here to report it so we can fix it.

"r WO new models have been introduced by Scammell Lorries, Ltd., Watford. One made its appearance within the past week or two, whilst the other, although only recently announced, has been in actual service and under a long period of 'testing for several months. They are respectively an oil-engined mechanical horse and a 15-16-ton rigid eight-wheeler.

The former, which was fully described in our issue dated October 15, has likewise been subjected to trial in the hands of actual operators, and although this has been of shorter duration, the machines have given, we understand, every satisfaction. Basically, the new vehicle follows e:tactly on the lines of the petrol-engined 6-ton M.H. model, but -in respect of the

power unit, its mounting and. attach-merits, different lines are followed. Whilst the oil engine at present installed may not be standardized, the models hitherto made have been' powered by a Perkins Wolf engine developing 45 b.h.p. at 2,000 r.p,m., and in this form the vehicle is described as a 6-10-tanner.

With regard to the new eightwheeler, this is a most interesting machine, particularly in respect of the front-bogie arrangements, the suspension system of which employs, like the well-known " rigid six," rubber columns in place of steel springs. At the rear, however, on the 15-16-tanner, semi-ellipties are used. This big vehicle is powered by a Gardner 6LW oil engine of 41 ins, bore aud 6 ins. I stroke, which develops 102 b.h.p. and , is suspended at three points on rubber.

The drive is transmitted through a Borg and Beck 16-in, clutch, equipped with a clutch stop, by a shaft, incorporating special rubber couplings, to a six-speed constant-mesh gearbox in which wide use is made of needle-roller hearings. Controlled by a single lever, the unit has pump lubrication, this system incorporating felt and magnetic filters. There is provision for a power take-off, and the box is mounted on rubber at three points.

Thence a IIard3,--Spicer propeller shaft takes the drNe to the third axle. In this the interesting ScaMmel spiralbevel final drive and epicyclic reduction gear is incorporated. Of immensely strong construction, the main frame is of channel-section carbon-steel, the longitudinals being braced by channel Ind' tubular crossmembers.

There are compressed air brakes acting on all eight wheels; steering is by Merles, cam and roller gear; the fuel tank is of 60-gallons dapacity, and all wheels are shod with 36 by 8 tyres, twins being provided on the driving and trailing wheels. Having a mean wheelbase of 17 ft. • 51 ins., • the overall length of this machine is 29 ft. 10 ins., and the body space 24 ft. 6 ins.