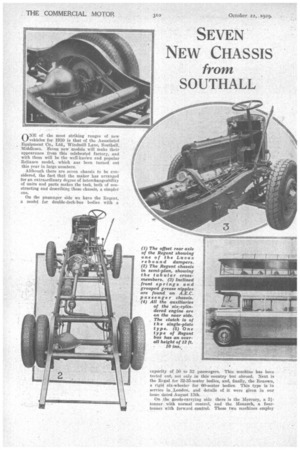 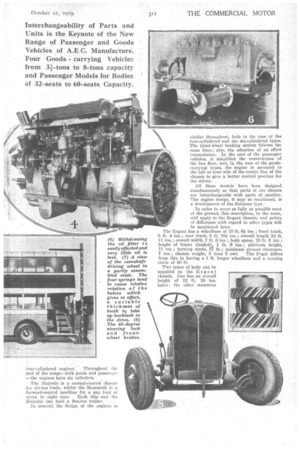 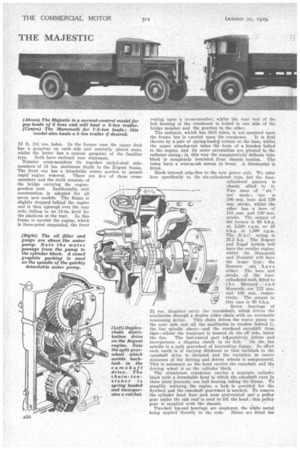 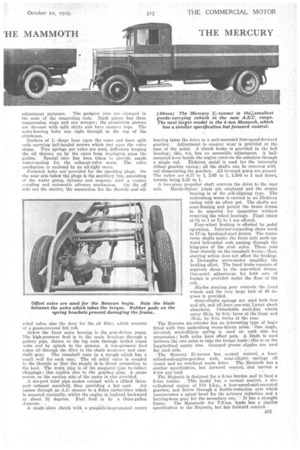 Page 54, 22nd October 1929 — SEVEN NEW CHASSIS
Close
Noticed an error?
If you've noticed an error in this article please click here to report it so we can fix it.

ONE of the most striking ranges of new vehicles for 1930 is that of the Associated Equipment Co., Ltd., Windmill Lane, Southall, Middlesex. Seven new models will make their appearance from this celebrated factory, and with them will be the well-known and popular Reliance model, which nas been turned out this year in large numbers.

Although there are seven chassis to be considered, the fact that the maker has arranged for an extraordinary degree of interchangeability of units and parts makes the task, both of constructing and describing these chassis, a simpler one.

On the passenger side we have the Regent, a model for double-deck-bus bodies with a capacity of 50 to 52 passengers. This machine has been tested out, not only in this country but abroad. Next is the Regal for 32-35-seater bodies, and, finally, the Renown, a rigid six-wheeler for 60-seater bodies. This type is in service in_London, and details of it were given in our issue dated August 13th.

On the goods-carrying side there is the Mercury, a 31‘ twiner with normal control, and the Monarch, a fourtanner with forward control: These two machines employ four-cylindered engines. Throughout the rest of the range—both goods and passenger —the engines have six cylinders: The Majestic is a normal-control chassis for six-ton: loads, whilst the Mammoth is a forward-control machine for a pay load of seven_ to eight. tons. Both this and the Majestic can haul a five4On trailer.

In general, the design of the engines is similar throughout, both in the ease of the • four-cylindered and the. six-eylindered types. The front-wheel braking system follows the same hues; also, the adoption of an .offset transmission. In the case of the passenger. vehicles, it simplifies the construction of the bus floor, and, in the case of the goodscarrying types, the engine is mounted to the left or near side of the centre line of the chassis to give a better control position for

the driver. , • All these models. have been designed simultaneously so that parts of one chassis are interchangeable with parts of another. The engine design, it may be mentioned, is a develepment of the Reliance type..

In order to coverms fully as possible most of the ground, this description, in the main, will apply to the Regent chassis, and points of difference with regard to other types will be mentioned -later.

Two types of body can be supplied on the Regent chassis. One has an overall height of 12 ft. 10 ins. laden ; the other measures 13 'ft 10 'ins. laden. In the former case the upper deck has a gangway on each side and centrally placed seats, whilst the latter has a central gangway of the familiar type. Roth have enclosed rear staircases.

Tubular cross-members tie together nickel-steel sidemembers of 11 ins, maximum depth in the Pegent frame. The front one has a detachable centre portion to permit

gearbox unit. Incidentally, unit construction is adopted for all seven new models. The frame is slightly dropped behind the engine and is then uPswept over the rear axle,falling to an 11-in, level for the platform at the rear. In this frame is carried the engine, which is three-point suspended, the front

resting upon a cross-member, whilst the rear end of the bell housing of the crankcase is bolted to one side of the bridge member and time gearbox to the other.

The radiator, which has Still tubes, is not mounted upon

the frame, but is carried upon the crankcase. It is held thereto by a pair of spring-loaded cotters at the base, -whilst the upper attachment takes the form of a bracket bolted to the engine, and its outer extremities are pivoted to the radiator easing; in this way the comparatively delicate tube block is completely insulated from chassis torsion. The tubes have a wire-in esh screen in front. ,& thermostat is fitted.

Much interest atta ches to the new power unit. We refer

here specifically to the six-cylindered type, but the four cylindered pattern is

this case is 65 b.h.p. Seven bearings of

21 ins, diameter carry the crankshaft, which drives the auxiliaries through a -duplex roller chain with an automatic tensioning device. This chain drives the water pump on the near side and all the auxiliaries in tandem behind the fan spindle above—and the overhead camshaft from that—whilst the tensioner is located On the off side, below

the fan. The list:MiMed part istpositively driven and incorporates a slipping clutch in its hub. On the, fan spindle is a split gearwheel of interesting design. In effect each tooth is of varying thickness so that backlash in the camshaft drive is obviated and the variation in centre distances of the driving and driven wheels is compensated. This is necessary as the head carries the camshaft and the driving wheel is on the cylinder block.

The aluminium crankcase carries a separate cylinder block with a detachable head in -Which the camshaft runs iii three plain'journals, one ball bearing taking the thrust. To simplify retiming the engine a lock is provided for the flywheel and the camshaft gearwheel is marked. TO remove • the cylinder head four jack nuts arOrotated and a pulley gear udder the cab roof is used to. lift the head; this pulley gear is supplied with the chassis.

Two-bolt big-end hearings are employed, the white metal being applied directly to the rods. Shims are fitted for adjustment purposes. The gudgeon pins are clamped in the ends of the connecting rods. Each piston has three compression rings and one scraper ; the aluminium pistons are die-cast with split skirts and have concave tops. The main-bearing bolts run right through to the top of the crankcase.

Rockers of L shape bear upon the cants and have split ends carrying ball-headed screws which rest upon the valve stares. Two springs per valve are used, deflectors keeping the. oil thrown tip by the cams from impinging upon the guides. Special care has been taken to provide ample water-cooling for the exhaust-valve seats. The valve mechanism is enclosed by an oil-tight cover.

Pocketed holes are-provided for the sparking plugs. On the near side below the plugs is the auxiliary line, consisting id the water pump, dynamo and magneto with a vernier coupling and automatic advance mechanism. On the, off side are the starter, the connection for the throttle and oil

relief valve, also the door for the oil filter, which consists of a gauze-covered felt roll.

Below the front main bearing is the gear-driven pump. The high-pressure feed is to the main bearings through a gallery pipe thence to the big ends through drilled crank webs and by splash to the pistons. A low-pressure feed takes oil through the filter to the chain tensioner and camshaft gear. The camshaft runs in a trough which has a . well for each cam.The oil relief valve is coupled to the throttle so that the supply is in direct proportion to the load, • The drain plug is of the magnetic type to /collect clippings; this applies 'also to. the gearbox plug. A gauze' screen on the suction side of the pump is also provided. , •

A six-port inlet pipe makes contact with a ribbed three

port exhaust manifold, thus providing a hot spot. Air passes through an A.O. cleaner to .a Solex carburetter which is mounted vertically, whilst the engine is inclined backward at about 3 degrees.. Fuel feed is by a three-gallon Autovac. .

A single-plate clutch With a graphite-impregnated centre bearing takes the drive to a unit-mounted four-speed-forward gearbox. Adjustment to counter . wear is provided at the base of the pedal. A clutch brake is provided in the bell houging ; this, too, has an accessible adjustment. A ballmounted lever beside the engine controls. the selectors through a single rod. Blektron metal is used for the internally ribbed gearbox casing; all the shafts can be removed with out dismounting the gearbox. All forward gears are ground The ratios are 4.37 to 1, 2.69 to 1, 1.594 to 1 and direct, reverse being 5.33 to 1.

A two-piece propeller shaft conveys the drive to the rear.

axle. Hardy-Spicer joints are employed and the steady

bearing is of the self-aligning type. The underslung worm is carried in an Elektron casing with an offset pot. The shafts are semi-floating and permit the brake drums to be removed for inspection without removing the wheel bearings. Final ratios of 61 to 1 or 71 to 1 are offered.

Four-wheel braking is effected by pedal operation. Internal-expanding shoes work in 17-in. hardened-steel drums. The transverse shafts under the front axle push upward ball-ended rods passing through the king-pins of the stub axles. These rods bear, directly on the camshaft levers ; thus, steering action does not affect the braking. A Dewandre servo-motor amplifies the braking effort. The hand brake consists of separate shoes in the rear-wheel drums. One-point adjustment' for both sets of brakes is provided under, the floor of the cab. . • Marks steering gear controls. the front wheels and the very large lock of 45 deglees is provided.

Semi-elliptic, springs are used both fore and aft, and all.have one-way Luvax shock absorbers. Detachable steel-disc wheels carry 36-in. by' 8-in; tyres at the front and 38-in, by 'I)-in, twins at the rear. • • The Renown six-wheeler has an interesting type of bogie

fitted with two unclerslung worm-driven axles. One single, inverted, semi-elliptic spring is used on each side for suspension;, both axles have offset pots. 'A. .blade. is used between the two axles to take the torque loads; this is on the longitudinal centre line. Groupedgrease nipples are used

for each axle. : : The Mercury 31-tormer has normal eontror, a fourcylindered-engine-gearbox unit, semi-elliptic ''springs all round and an ,overhead worm drive. The Monarch has a , similar specification, but forward control, and carries a 4-ton pay load.

The Majestic is designed for a 6-ton burden and to haul a 5-ten trailer. This model has .a normal control, a sixcylindered engine of 110 b.h.p.; a four-speed-unit-mounted gearbox, and drives through a double-redtiction axle' which incorporates a spiral bevel for the primary rediaction• and a herring-bone gear for the 'secondary One.' .It has a straight frame. The Mammoth for 7-8-ton. loads" has a similar

specification to the Majestic, but has forward, control,