NEWS RECEIVED AS WE GO TO PRESS. 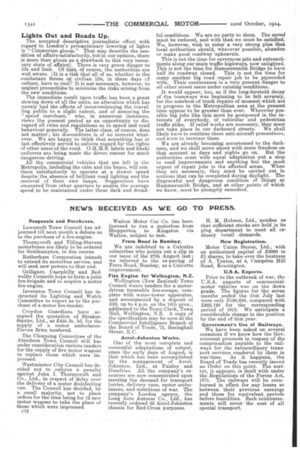 Page 4, 22nd October 1914 — NEWS RECEIVED AS WE GO TO PRESS.
Close
Noticed an error?
If you've noticed an error in this article please click here to report it so we can fix it.

Lowestoft Town Council has adjourned till next month a debate as to the purchase of a fire-engine.

Thornycroft and Tilling-Stevens motorbuses are likely to be ordered for Southampton, in due course.

Rotherham Corporation intends to extend its motorbus service, and will seek new powers to that end.

Gelligaer, Ca.erphilly and Bedwellty Councils hope to form a joint fire-brigade and to acquire a motor fire-engine.

Inverness Town Council has instructed its Lighting and Watch Committee to report as to the purchase of a motor fire-tender.

Croydon Guardians have accepted the quotation of StrakerSquire, Ltd., at 2455 5's. 3d. for the supply of a motor ambulance. Eleven firms tendered.

The Cleansing Committee of the Aberdeen Town Council still has under consideration various tenders for the supply of five motor wagons to replace those which were impressed.

Westminster City Couneil has decided not to enforce a penalty against John I. Thornycroft and Co., Ltd., in respect of delay over the delivery of a motor disinfecting van. The Council has decided, by a. small majority, not to place orders for the time being for 12 new motor wagons to take the place of those which were impressed.

0_2 Walton Motor Car Co. has been licensed to run a motorbus from Shepperton to Kingston via Walton, subject to test.

We are indebted to a Calcutta subscriber who points out a slip in our issue of the 27th August last ; we referred to the re-paving of Frere Road, Bombay, as a Calcutta improvement.

Wellington (New Zealand) Town Council wants tenders for a, motordriven turntable fire-escape, complete with water-tower apparatus, and accompanied by a deposit of 250, up to 4 p.m. on the 12th prox., addressed to the Town Clerk, Town Hall, Wellington, N.Z. A copy of the specification may be seen at the Commercial Intelligence Branch of the Board of Trade, 73, Basinghall Street, E.C.

One of the most complete and successful adaptations of output, since the early days of August, is that which has been accomplished by the management of AndJohnston, Ltd., Ltd., at Paisley and Dumfries. All the company's resources are now concentrated upon meeting the demand for transport lorries, delivery vans, motor ambulances, and munitions of war. The company's Landon agency, the Long Acre Autocad. Co., Ltd., has recently ordered 30 Arrol-Johnston chassis for Red-Cross purposes.

H. M. Hobson, Ltd., notifies us that sufficient stocks are held in its plug department to meet all ordinary retail demands.

Motor Union Stores, Ltd., with an authorized capital of 22000 in 21 shares, to take over the business of A. Yeates, at 4, Campden Hill Road, Kensington.

Prior to the outbreak of war, the U.S.A. exports of commercialmotor vehicles was on the down grade. The figures for the seven months ended the 31st July last were only .129,648, compared with 2223,129 for the corresponding period of 1913. We anticipate a considerable change in the position by the end of this year.

Government's Use of Railways.

We have been asked on several occasions if we know how the Government proceeds in respect of the compensation payable to the railways for the extraordinary transport services rendered by them in war-time. As it happens, the Board of Trade has recently issued an Order on this point. The matter, it appears, is dealt with under the Regulations of the Forces Act, 1871. The railways will be reimbursed in effect for any losses as between -their previous earnings and those for equivalent periods before hostilities. Such reimbursements will cover the cost of all special transport.